For about the 6,554 time since 1264 B.C. the sunlight entered the Great Temple of Abu Simbel of the Egyptian King Ramses the Great, in Abu Simbel city, south Egypt.

1,130 km south of Cairo on the west bank of Nasser Lake, Egyptians celebrate the scientifically-miraculous man-made solar phenomenon of the solar illumination of the innermost chamber of the 33m-tall Great Temple of Abu Simbel twice per year.

The significance of this miraculous site doesn’t stop at this military commemoration only. On the contrary, the bigger temple of Abu Simbel which archeologists know as the Great Temple of Abu Simbel has a more astonishing tale to tell.

Twice per year on February 21, and October 21, the larger temple of Abshek city which lies beside the temple of the publicly-loved Egyptian Queen Nefertari, the beloved wife of Ramses II, witnesses a rare and a unique astronomical, yet man-made, phenomenon which was perfectly engineered and calculated by the ancient mathematicians, astronomers, architects, and scientists of the Muslim-dominated country of Egypt.

The ancient ancestors of Egyptian Muslims succeeded in applying their advanced theoretical knowledge to real life represented in a world-unique landmark on the land of Egypt. 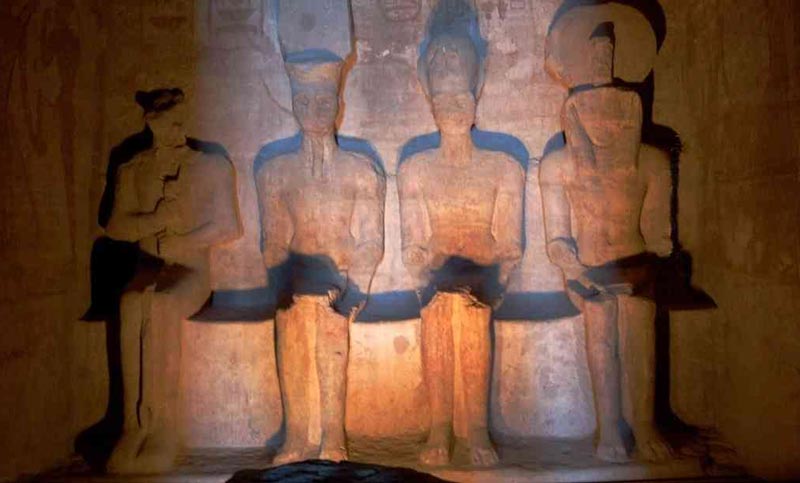 Ancient Egyptians designed the temple’s chamber to receive sunlight on two days per year only.

Ancient Egyptian scientists constructed the inner chamber of the Great Temple of Abu Simbel to be in total darkness throughout the year, which was sharply calculated and documented by them for the first time in human history, and they intended to light the chamber with sunlight on two dates solely.

The first date is February 21 which memorializes the crowning of the Egyptian King Ramses II, while the 21st of October commemorates his birthday. After saving the temples from drowning beneath the water of Nasser Lake in 1968, UNESCO relocated the temples and worked hard to keep this man-made astronomical phenomenon going. The new coordinates and the 210m-higher elevation obligated the phenomenon to take place 24 hours post the actual two dates the Ancient Egyptians scheduled for the phenomenon, however, the phenomenon is still occurring till now on both dates of February 22, and October 22.

Magical Brilliance in the Innermost Chamber 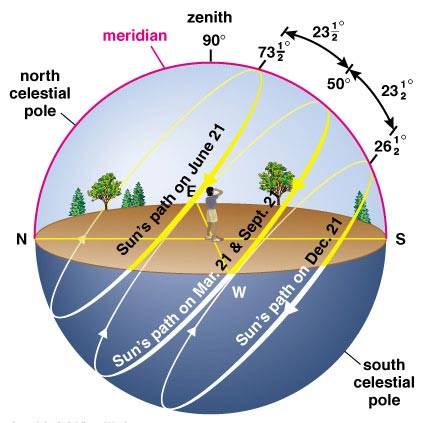 The innermost chamber which hosts the statue of Ramses the second lies about 60 meters away from the entrance gate which lets the sunlight in.

Ancient Egyptians built over thousands of years an extremely advanced knowledge of astronomy that allowed them to implement this event. They accurately calculated that the Sun rises and sets from the sole point of exact east on March 21.

They were also aware that its rising and setting points shift by a quarter of a degree every day throughout the year towards the north, till it reaches a point that is 23 degrees and 27 minutes (23°27’N) away from the Equator on the 22nd of June.

Via methodical observation they found that the Sun rises and sets in all the points mentioned previously twice per year. Moreover, they realized that the time span between the points vary depending on the distance of the point from the exact point of actual east.

The brilliance of the ancestors of the modern Egyptian Muslims didn’t stop at this point, but they managed to make an application out of the essence of these conclusions and observations.

They chose just one point from the points we mentioned above where the Sun rises and sets twice per year in Egypt. Their choice was the point that lies 4 months away from the two edges points of the apparent movement of the Sun as seen from Planet Earth (60 days before the Solstice and 60 days after it, respectively).

Egyptians didn’t chose the point haphazardly, they selected the point which matches with October 21, the birthday of the Egyptian King Ramses II. Even though, some archeologists believe that the other date of illumination in February 21 might be highly unluckily to correspond to the actual day of Ramses II’s coronation, especially because although the Egyptian Calendar is one of the most accurate calendars in humankind history; but normally the solar calendar shifts minutely because of naturally-changing celestial mechanics from year to year, and because it is difficult to know the precise date of Ramses II’s coronation.

Now here we come to another point of amazement as the Egyptian brilliancy didn’t also stop at this legendary level of astronomical and mathematical knowledge, but the construction of the temple itself was another tale of Egyptian scientific superiority.

Egyptians have accurately calculated by degree the carving of the great temple in the mountainous terrain to face the chosen apparent point in the east from which the sunlight of sunrise enters. Sunlight enters from a well-measured narrow 60-metre long window to illuminate the face of the statue of the king on the precisely chosen two dates of birthday and coronation while the chamber will remain shrouded entirely in darkness all over the other days of the years.

Egyptians designed the very narrow window to stop any sunlight from illuminating the face of the king on any other days except for the 22nd of February and October, and thus the sunlight shifts away from the sanctum by a quarter of a degree every day.

Astronomically-oriented engineering and architecture seemed to have attracted the attention of ancient Egyptian polymaths to the extent that made the map of Egypt dotted with similar unique landmarks with astronomical alignments and orientations.

Archaeoastronomers attempted to find out how important astronomy really was in ancient Egypt. In different Egyptian cities, the buildings had different orientations based on the specific ancient Egyptian religious belief of that place.

For instance, Egyptians have constructed some temples to align with a star that either rose or set at harvest or sowing time. On the other hand, they made some others temples oriented toward the Solstices or Equinoxes.

Egyptian architectural designs sometimes became quite complex. At the temple of Medinet Habu, Luxor, there are actually two buildings which are slightly off-kilter. Archaeologists suggested that Egyptians have built the second one when the altitude of the other temple’s orientation stars changed over a long period of time.

Another example stands greatly atop the Giza Plateau in Egypt’s 3rd largest city, El Giza, where the sides of the 3 pyramids are astronomically oriented to be North-South and East-West within a small fraction of a degree of error in an astounding alignment with Orion Belt’s Stars of Orion Constellation.

Other shocking numbers to our ears is that the weight of the Great Pyramid of Giza “Khofo (Cheops) Pyramid” is 5,273,000 tonnes. With multiplying it by thousand million, astonishingly you’ll get the number of Planet Earth’s weight. Furthermore, the latitude of Khofo Pyramid’s center is 29.9792458⁰N. By multiplying it by ten, the result will be 299.792458Km/s which is the accurate number of Light Speed constant.

This article is from Health & Science’s archive and was originally published at an earlier date.