UV light is an electromagnetic radiation with a wavelength shorter than that of visible light, but longer than X-rays.
aaa

Ultraviolet rays have recently been blamed for the high incidences of skin cancer across the globe. However, many people are not aware that ultraviolet rays also have some beneficial effects. It was in 1903 that the Nobel Prize for Medicine was awarded for the discovery of UV rays as an effective treatment for many ailments.

However, UV rays have received bad press due to their contributions to the “greenhouse effect.” UV intensity is now forecast in population centers daily. National Geographic reported that more than 60% of the sun’s UV light strikes between 10a.m and 3p.m, increasing the risk of tissue damage. This is based on increased cases of fatal and non-fatal skin cancer in the U.S. (Matthews, p.88).

The Environmental Protection Agency (EPA) advises people to “protect against UV light whenever you can see your shadow.” In response, people began darkening windows, wearing sunglasses and increasing their usage of sunscreen lotion.

However, like all of Allah’s creations, UV rays are not “all bad”. The three elements combined (sun, earth and water) are tahar (pure) in Islam. On a dull day, ultraviolet rays (radiation) penetrate the haze, thus revealing the sun’s position and enabling some animals to navigate by the sun. Solar radiation consists mainly of ultraviolet and infrared rays (Hutchinson, p.546). These rays are strongly germicidal and invisible to the human eye. They travel at wavelengths of four nanometers within x-ray range (Hutchinson, p.614). 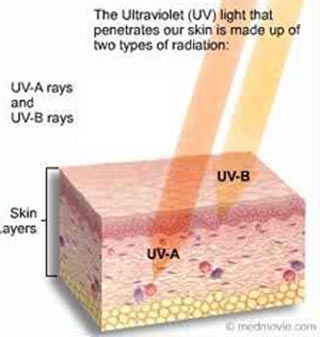 Man is also uses the guidelines that Allah (swt) had presented in nature by using these rays to benefit mankind. UV disinfection systems for water and waste have recently been developed by a Canadian-based company, Trojan Technologies, for use by municipalities around the world.

In June 2001, new regulations were set up as a framework for the use of UV disinfection, in order to address parasites known to be resistant to chlorine and as a step toward the reduction of chemical disinfection. The regulation asks that all municipalities who draw drinking water from surface water sources in Quebec filter and disinfect drinking water supplies before distribution (ENS, p.1).

This argument over the safety of UV rays can be explained more clearly by explaining the various kinds of UV rays that exist. There are three types. UVC rays are the shortest waves and potentially the most harmful. Generally these are screened out by the upper ozone layer, but due to ozone depletion, the danger of exposure on earth is growing. UVB rays penetrate the epidermis and activate the melanocyte cells that produce melanin, which results in a darkened or tanned skin. But, they can also cause skin cancer and become even more dangerous when combined with UVA.

The drained feeling one feels after a period in the sun is due to suppression of the immune system caused by exposure to UVB rays. UVB rays reflect from sand and water causing an increased concentration of rays in the air – 17% from sand and 40% from water. UVA are also the main cause of premature aging of the skin as they penetrate through the top layer of the skin into the dermis -the 2nd layer of the skin (Opotion, p.1). However, trace amounts of UVA in natural daylight are necessary for physical and mental health, muscle strength, energy and learning. Our immunity improves and stimulates our metabolism while decreasing food cravings and increasing our intelligence.

Trying to put things into perspective, founder of photobiology – Dr. John Ott, wrote that mankind’s adaptation to the full range of the solar spectrum has biological effects causing mal-illumination (bad illumination as in bad nutrition – malnutrition). He continues on to say, “There are neurological channels from the retina to the pineal and pituitary glands, the master glands of the whole endocrine system that controls the production and release of hormones. This regulates your body chemistry and its growth, all organs of your body including your brain and how they function” (Hattersley, p.3).

The other end of the scale is UV deprivation. This results in malignant melanoma (skin cancer), which is incorrectly blamed on sun exposure. A U.S. Navy study confirmed this when they discovered that skin cancer occurred amongst those who work mostly or completely indoors. Most melanomas occur on parts of the body least exposed to sunlight. So, both overexposure and underexposure constitute health risks. Even low exposure can increase the risk of eye cataracts when combined with a junk food diet rich in saturated fats and oxidized products. Prolonged exposure to UV rays, combined with a sensible diet rich in vitamins C and E do not produce this damaging effect (Hattersley p.2, 3). 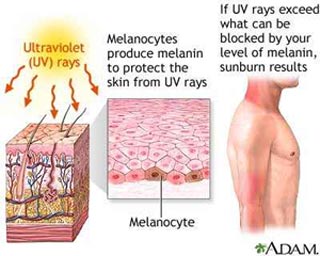 With the popular argument that sun exposure causes skin cancer comes the increased use of sunscreen, which only block out UVA and UVB rays and not the dangerous UVC rays. Sunscreens penetrate the skin increasing toxic burden in the bloodstream. They also increase the risk of melanoma by causing cellular mutation when the cells interact with the combination of chemicals and light (Hattersley, p.3, 4).

As we increasingly realize that we, as humans, cannot completely shape and manipulate the environment to our own whims, we become aware that not all forms of modern lifestyles and work styles are conducive with the laws of nature. For our continued good health and sustainable future we require Allah’s (swt) laws of nature to sustain us.

This article was first published in 2002 and is currently republished for its importance.