Ephedra is a medicinal preparation from the plant Ephedra sinica. Several additional species belonging to the genus Ephedra have traditionally been used for a variety of medicinal purposes, and are a possible candidate for the Soma plant.
aaa

Many people enjoy taking herbs to avoid the side effects of heavy medication. However, in the case of Ma Huang the consumer may be getting many more side effects than they bargained for.

Traditionally, small amount of Ma Huang stimulates healing in the body. Nevertheless, modern herbology uses Ma Huang in larger amounts. Further dangers occur when it mixes with other herbs that increase its strength or change its effects on the body.

In traditional Chinese medicine, Ma Huang (also commonly known as ephedra) refers to the stems and branches. It has an affinity with the lungs and the bladder and act as a diaphoretic and stimulant to the respiratory system by opening the bronchioles. It treats chills, fevers, bronchial asthma and hay fever (Reid, p.81).

Maa Huanggen, refers to the roots and rhizome and has little medicinal benefits, but is effective against profuse night sweats. The name ephedra, however, actually refers to 40 related species of plant. For example, there is ephedra sinica from China, ephedra distacha, trifurca and viridis from Europe, ephedra nevadensis (Mormon Tea) and ephedra americana from North America and ephedra Gerardiana from Pakistan and India (Vaughn, p.1).

The North American variety doesn’t contain the alkaloids present in the Asian varieties (Box p.1). Traditional Chinese herbology names Ma Huang “the army general” because it can be powerful but dangerous if incorrectly used (Alternative, p.2).

Traditionally, practitioners used it in very small amounts with visualization and breathing techniques at times of imbalance within the body, balancing and energizing the body with no side effects. A quarter of a teaspoon in a cup of boiling water focuses the person’s energy (Gurudas, p.168-170).

In larger amounts, however, ephedra can be deadly. Ephedra contains large amounts of ephedrine, which react badly with medical conditions like hypertension, glaucoma, hyperthyroidism and diabetes (Vitacost, p.1).

In fact, Ephedrine’s chemical structure is similar to the human body’s adrenaline in that it raises blood pressure by pumping more blood and taking it away from the internal organs, muscles and legs.

The pupils dilate after taking ephedrine containing herbs and take in more light – the bronchioles also open for easy breathing. This is also what prepares us for our instinctual ‘fight or flight’ action when in danger.

This effect of ephedrine on the heart and the blood pressure, therefore, controls any dangerous drop in blood pressure during spinal and epidural anesthesia. 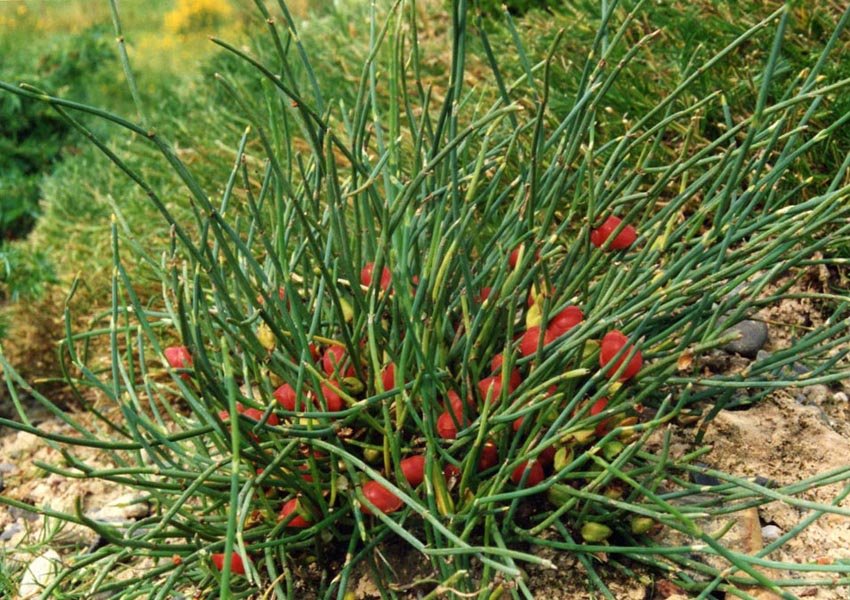 However, this increase of blood flow is at the expense of the kidneys and the intestinal blood flow. Uterine muscles relax by ephedrine – and even with the whole plant – it’s not for pregnant females (Gurudas, p.168).

In the treatment of asthma and hay fever, ephedrine is effective in mild to moderate cases. Its peak bronchodilatory effect occurs one hour after ingestion and last for five hours (Vaughan, p.2).

Although ephedra can provide benefits to the body, it’s harder to monitor these benefits when it mixes with other herbs or drugs. As a dietary supplement, for instance, ephedrine is combined with a cocktail of ingredients like caffeine, aspirin and other ephedrine alkaloids. Industry analysts stated that ephedrine-based products have fueled a growing sports nutrition and supplement market.

However, four football players have died a few years ago in what researchers diagnosed as ephedrine related deaths. Ephedra has become suspect because of how it is used by athletes. It’s used to enhance performance by increasing stamina, heart rate and energy. However, it is often used in summer heat, in high humidity, and during intense training conditions.

In fact, as the heart beats frantically, the body sweats, losing water, which lowers the blood volume, which in turn increases the blood pressure.

Cardiologists say, “The body is already releasing adrenaline, and the sympathetic nervous system is highly stimulated. Then you combine all of this with a product, which is doing the same thing. In susceptible individuals this is a recipe for disaster.”

Traditionally, ancients didn’t use Ma Huang in diet formula or as a recreational or sports drug. Furthermore, because the properties from the whole plant work synergistically, many practitioners of herbal medicine prescribe Ma Huang with other herbs.

For example, in traditional Chinese medicine, for asthma, doctors mixed Ma Huang with almond, or with mint for allergic skin reactions (Reid, p.81).

Isolated from the source, however, ephedrine (an extract from Ma Huang) can be as toxic as other alkaloids such as cocaine, morphine and quinine (Dentali, p.1).

In fact, ephedrine is used to produce the illegal drug methamphetamine. Because of this, the U.S Congress attempted to ban ephedrine in 1995 but failed (Vitacost, p.1).

Now, it’s readily available in any health food store as part of the supplement industry and is available in capsules, concentrated drops, powder-form, and extracts (Box, p.1).

Another dangerous modern use of ephedrine is in weight loss programs. The thermogenic effect, utilized in traditional Chinese medicine to treat chills, is directed towards weight loss in combination with caffeine.

In fact, the caffeine as a stimulatory effect upon ephedrine, Ephedrine alone lasts quite long in the body. With caffeine the effect is that of amphetamines – insomnia and dependence.

Long-term use of this combination depletes magnesium within the body leaving the muscles over-stimulated and eventually weakened (A-better-way p.3).

From June 1997 – March 1999, the FDA received 140 complaints of adverse reactions to ephedra-based supplements. Cases included stroke, heart attacks, seizure and death. The age-range of the complainants was 18 – 45 and they took 28 – 36mg daily (Carey, p.2).

Moreover, when toxicologist Theodore Farber reviewed FDA reports on ephedra on 900 incidences, he found many of the complainants had been misusing these supplements.

They had a history of hypertension, were diabetic, had a family history of heart diseases or were taking the supplements with other medications. In one case the person had been taking 85 pills daily (Monahan, p.2).

In Germany, where there are regulatory standards for herbs and supplements, the German Commission E Monograph recommends an average single dose of 15 – 30mg of ephedrine, which is equivalent to a daily intake of 120mg of ephedrine for adults and 2mg for children (Wong, p.1).

Also, they only recommend it for respiratory tract diseases with mild bronchospasms (Monahan, p, 1).

The FDA has recommended that patients with heart disease, high blood pressure, thyroid disease, diabetes, difficulty in urination due to prostate enlargement and those who take hypertensive drugs and antidepressants refrain from using ephedrine based products (Vaughan, p.6). They recommend a maximum daily dosage of 24mg.

Herbs, as a part of the laws of nature, are about taking the time to understand what is really going on with our health and not just physically. Only then can man and nature benefit from each other.

Traditionally, ephedra has only ever been used with other herbs, was used in minute doses and was never used for weight loss or athletic endeavors.