There is a time and place for everything, including joking. There is also an audience for joking – and everyone should know that, especially when telling jokes and provoking laughter.
aaa

When I started about Islam, some two and a half decades ago, I wasn’t too impressed with what I saw.

As a child, I used to laugh and run around. Joking and kidding each other were the norm, but the teachers of Islam whom I had come to know seemed sombre and didn’t think laughing was a grand idea.

Everything about the religion seemed serious, culling happiness at bay.

Many years later, I know for a fact that when new reverts come to Islam, many of them suddenly feel a paradigm shift in lifestyle that is not always positive. Although they find a lot of peace and serenity in this new religion, there is a persistent drone over how a Muslim should behave, without considering the questions “why”.

There’s the different dress-code, a constant need to be vigilant about their deeds. Some have to distant themselves from family and friends who are unsupportive.

There’s no more “Merry Christmas” or other religious holidays that Muslims do not celebrate. It can all seem rather harsh, coming to a religion that is different and somewhat serious. And it can be really difficult to assimilate into Muslim communities that have a stronghold of a certain culture rather than those who follow Islam and the perfect way of life.

Granted, it’s true that Islam requires us to be diligent in all our deeds, but Islam also talks a lot about moderation. Muslims are constantly encouraged to be happy and positive in the Quran, and joking and laughing are not overtly unlawful. However, there are some considerations when it comes to being merry Muslim-style, and why is that?

With stand-up comedians that bash other people for no other reason than getting a few laughs, the plethora of jokes on April Fool’s Day, publications of books just dedicated to “dirty jokes,” and laughter that children get out from the playground through bullying peers, it only makes sense that Islam has sanctioned guidelines on when laughter is lawful and is good for Muslims and when joking and frolicking treads the fine line of it being forbidden.

Guarding Your Tongue from Speaking Wrongly

A man came to Prophet Muhammad and said:

“Give me an animal to ride on”

“I will give you the son of a she-camel.”

The man said with astonishment:

“What could I do with the son of a she-camel?”

“What do female camels deliver except camels? (i.e., that every camel, even if it is grown old, is the product of a female camel).” (Abu Dawud)

Prophet Muhammad would insert a joke here and there during his life, to liven up the atmosphere even during difficult times for the Muslims. However, his jokes were kind in nature and he always spoke the truth. He never joked excessively to embarrass anyone and he ensured that his jokes were taken in good nature to strengthen the bonds between Muslims.

Belittling Sins and Glorifying the Sinful

We all know of the jokes nowadays. The sex jokes, the alcohol jokes, those that involve matters that are unlawful. These jokes have come to sound petty, not very offensive, and even part of daily conversation amongst the youth. And that is because it has become the cultural norm. This is where we have sub-consciously been manipulated into believing that little sins do not matter. However they do.

Joking this way belittles the magnitude of sins. When these jokes become mainstream conversation, then the magnitude of wrongness that they carry becomes lightweight and those who commit these sins are indirectly glorified – just because they can make others laugh. What a wrong route to take when it comes to glorifying the sinner.

Similarly, scaring someone with stories just for kicks is also not allowed. Some jokes can get physical, especially amongst younger or teenage boys. Though physical interaction, like wrestling is seen as part of the Sunnah, it is not permissible for it to become a harmful activity, to humiliate or scare another person. Prophet Muhammad said:

“It is not permissible for a Muslim to frighten another Muslim.” (Abu Dawud)

Bad language is also another cultural norm when it comes to joking, especially amongst the youth and even many adults. Using the “F word” and name-calling of certain groups of people are also normal and invoke ripples of laughter. Prophet Muhammad said:

“The Muslim does not slander, curse, speak obscenely or speak rudely.” (At-Tirmidhi)

Keeping the Balance in Laughter

“Joking is Sunnah, but only for those who know how to do it and do it at the appropriate time.” 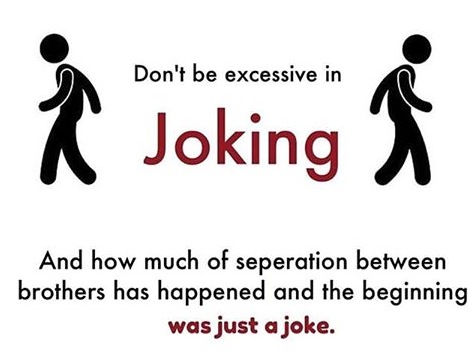 Being a Muslim requires careful thought and conduit. There is a time and place for everything, including joking. There is also an audience for joking – and everyone should know that, especially when telling jokes and provoking laughter.

Laughing at a party or a meeting is permitted, as long as laughter is not excessive to the point of loosing control. There are still plenty of Muslims and non-Muslims facing hardship around the globe that it would be insensitive to keep laughing about frivolous matters and turning valuable attention, efforts and time away from them.

Of course, for parents who love joking, laughing and playing with children, should know that it is not only permitted, but encouraged with keeping moderation. And while doing that, they shouldn’t joke and laugh to the extent that their children lose respect for them. Excessive teasing is also not allowed, as it can cause emotional baggage in children, especially those who are sensitive in nature.

“Do not laugh too much, for laughing too much deadens the heart.” (Ibn Majah)

In another narration, Prophet Muhammad had also cautioned not to speak too much about religious matters as this could turn hearts hard. Either way, a Muslim’s life needs to be in moderation. A Muslim should laugh and play with his family, share permissible jokes amongst friends, but keep serious when it comes to matters that require attention.

“Whoever laughs too much or jokes too much loses respect, and whoever persists in doing something will be known for it.”

Keeping good character is imperative in Islam. Joking and laughing do build character of someone who appreciates joy and life in general, so to keep Islam a religion of severe seriousness would be an imbalance to the Islamic faith.

At the same time however, moderate laughter is the best way to go for an observing Muslim – so it pays to pay heed as to how Prophet Muhammad would conduct such interaction as only the best of believers would follow his footsteps.