It is a common practice of Muslim scholars writing on some field of knowledge to define its basic terms. When it comes to Arabic words, this involves looking at their root meanings as well as their usage.

This practice is certainly useful when seeking to understand Islam as a faith and way of life, as there are many things to learn from the very fact that it is so named.

In this part, we shall explore two significant features of the name Islam, making special reference to how the Quran speaks of Islam and being a Muslim. We shall note that the word reflects the concept of peace, and that it is a name used right from the start.

A Meaning of Peace

The root s-l-m, from which the word Islam derives, has the essential meaning of being free of any flaws or harmful things. Thus the derivatives of this root include “salamah” which indicates soundness and safety, and “salam” which means “peace”.

The verb-form “islam”  thus conveys entering into a state of peace and security. In short, this is what we refer to as “submission”. The active participle of the verb, that is, the word for “submitter”, is “muslim”.

It may not be clear how important it is to look at the three-letter root of a word to understand its import, but this is something significant in the Arabic language.

At the same time, it may seem like an exaggeration to state, as Muslims often do, that “Islam means peace”.

In fact, the Quran uses a number of different terms to refer to this religion, and one of them is the word peace itself. In the second chapter of the Quran God says what means,

[You who believe, enter wholeheartedly into peace (al-silm) to God…] (Al-Baqarah 2:208)

This verb form means the opposite of war (that is,peace) and is used here as an exact equivalent to saying “Islam”, according to commentators. This means that the religion of Islam is indeed called “peace”, just as it is called “submission” and numerous other secondary names.

Islam is not only “a religion of peace”: it is the religion of life, which means that it provides guidance for all situations that arise in our troubled world. Yet even aggression is to be met with high virtues in the pursuit of peace.

The goal is not to “make the world submit”, as some misunderstand, but to invite each soul to its own willful surrender to the Creator alone, not to any human force or worldly desire. This is the true source of inner and outer peace, and is the most liberating concept ever taught to humanity.

As well as attention to linguistic roots, we also must differentiate between the general meanings of a word, and its technical meaning in context.

In this case, the difference is between what we may describe as “small-i islam” which means to live a life submitted to God, and “capital-I Islam” which is the well-known religion, whose adherents declare that “There is none to be worshiped but God, and Muhammad is the messenger of God.”

This declaration is what entitles a person to be known as a (capital-M) Muslim, a member of the worldwide community of Islam.

Of course, the Arabic language does not have capital letters, so what we really intend is to distinguish between submission as a religious ideal in general, and its usage as a proper noun — or what philosophers call its “reified” meaning.

When we look at the numerous references to “Islam” in the Quran, some could be understood in both ways, but others clearly show that Allah has chosen this name for His religion and named those who follow it “Muslims” (submitters).

God Almighty declares in the Quran that all of creation is submitted to Him  and that He, being the only true Deity, is the One to Whom human submission is due.

The “best religion” is to “submit one’s face to God and do good”.

The same term appears frequently in the stories of the prophets, from which we shall mention a few examples.

The patriarch Abraham (peace and blessings be upon him) is declared as having been neither Jewish nor Christian, but in fact “upright in religion, a Muslim” (Aal `Imran 3:67).

When he was commanded to submit, he said immediately

[I have submitted myself to the Lord of the Worlds] (Al-Baqarah 2:131)

When he was called upon to sacrifice his first-born son Ishmael, they both submitted to this Divine command, until God announced that they had passed the test. When building the Sacred Mosque in Makkah, they prayed together that God would raise up from their descendants “a Muslim nation” (Al-Baqarah 2:128).

The prophets after Abraham are described as “those who submitted”, which of course does not deprive those before him of the same virtue.

Prophet Jacob (peace be upon him) entrusted his children on his deathbed that they must follow the religion of their forefathers Abraham, Ishmael and Isaac (peace be upon them) and not die except as Muslims.

The Pharaoh who opposed Moses (on whom be peace) vainly declared at the moment of death that he believed in the God of Israel and was “one of the Muslims” (Yunus 10:90).

The disciples of Jesus (peace be upon him) were inspired to believe, so they did so and said “And bear witness that we are Muslims”. (Al-Ma’idah 5:111)

All of this goes to show that the “religion of submission” (deen al-Islam) is both grounded in nature and rooted in history. As for its usage in the context of the last chapter of prophethood, we find a number of relevant passages in the Quran: 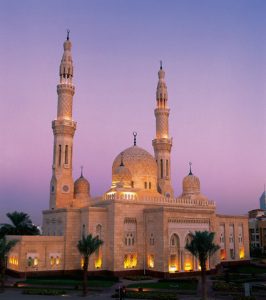 [Whoever seeks a religion other than Islam, it will never be accepted from him
and he will be one of the losers in the Hereafter.] (Aal `Imran 3:85)

[…This day I have perfected for you your religion, and completed My favors upon you, and have chosen for you Islam as your way of life…] (Al-Ma’idah 5:3)

[Who is better in speech than one who invites to God, works righteousness and says, “I am of the Muslims”?] (Fussilat 41:33)