Honey | Color & flavor of honey differ depending on the bees' nectar source.
aaa

Remember that old saying: an apple a day keeps the doctor away? Well, how about this one: keep your lives sunny by taking some honey!

Well… I never was good at poetry. But the fact is, as far as the meaning goes, my new saying is true.

Honey is “manufactured” in one of the world’s most efficient factories, the beehive. Bees may travel as far as 55,000 miles and visit more than two million flowers to gather enough nectar to make just a pound of honey.

The color and flavor of honey differ depending on the bees’ nectar source (the blossoms). In general, lighter colored honeys are mild in flavor; while darker honeys are usually more robust in flavor.

Honey has been used for its therapeutic powers for centuries. According to a Theban papyrus written in 1870 BC, the Egyptians fed and healed their children with honey. Hippocrates used honey in many different ways.

The scientific research that began a few decades ago, and recent experiments in hospitals in Europe, the USA, and especially the Far East and China, have revealed unquestionable therapeutic effects that have paved the way towards new medical research.

Honey is essentially a food rich (about 70%) in simple, easily digestible sugars – fructose, glucose and saccharose – which makes it an excellent source of energy.

Its high energetic power and its nutritional values make it a food for physical effort and is recommended for sportsmen before and after effort.

Its dynamogenic and stimulant action on the heart increases stamina and favors the body’s powers of recuperation and prolonged efforts.

Generally, when consumed daily, honey increases resistance to physical and intellectual fatigue, strengthens the body against stress and strains of life and favors the assimilation and digestion of other foods.

In digestive disturbances, honey is of great value. Honey doesn’t ferment in the stomach because it is easily absorbed and there is no danger of bacterial invasion. The flavor of honey excites the appetite and helps digestion. For anemics, dyspeptics, convalescents and the aged, honey is an excellent remedy and tonic.

In malnutrition, no food or drug can equal it. The laxative value of honey is well known. Its fatty acid content stimulates peristalsis. It is also recommended for hyperacidity, and gastric and duodenal ulcers.

Honey is also advised in cases of asthenia (state of physical or psychological fatigue), anorexia and states of undernourishment. 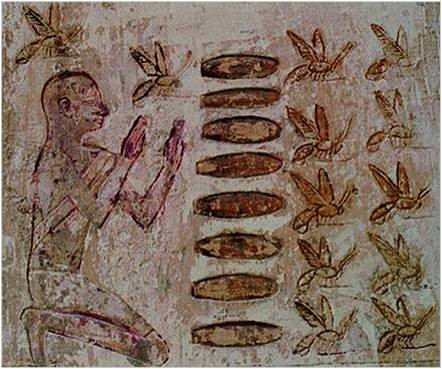 Honey has been used by Ancient Egyptians to treat a variety of ailments through topical application.

The antibacterial substances it contains make it appropriate for certain ENT infections (laryngitis, coughs) and intestinal or kidney disease. In external use, its healing power on wounds, injuries and skin troubles has been noted.

1 kg of honey equals 320 Kcal. It has a sweetening value equal or slightly higher than sugar. Lipids and protides are practically non-existent in honey.

It also contains pollen grains, yeast, starch, mineral dust and flavinoids. In addition, vitamins B, C and occasionally A, D and K can be found in very small quantities.

Royal jelly is rich in amino-acids, trace elements and vitamins. It restabilizes and revitalizes. It induces an improvement in energy, a feeling of euphoria and can even restore the appetite.

It stimulates the production of red cells and has a strong anti-infective action. It also is beneficial in neurasthenia, anxious states, minor depressive states, some dermatological problems and in anemia, low blood pressure and arteriosclerosis.

“And thy Lord taught the Bee to build its cells in hills, on trees, and in (men’s) habitations; Then to eat of all the produce (of the earth), and find with skill the spacious paths of its Lord: there issues from within their bodies a drink of varying colors, wherein is healing for men. Verily, in this is a sign for those who give thought.” (Surat An-Nahl:68-69).

This article was first published in 2007 and is currently republished for its importance.