The Big Bang model appears naturally within the general Theory of Relativity.
aaa

After Hubble announced the final results of his observations in 1929, physicists’ view of the universe began to change completely. In fact, before Hubble published his findings, Friedmann, who had used the equations put forth by Einstein in 1916, stated in 1922 with his study that the universe should be expanding. However, in those times—mostly for philosophical reasons—people pictured the universe as static.

Therefore Einstein, who had felt uneasy about the fact that his first set of equations suggested a dynamic universe, made a change in his equations in order to have a static universe model. After the observations of Hubble, Einstein remarked that he considered that change to be the biggest mistake of his career.

So the data revealed after Hubble’s observations raised great surprise and excitement. In time, as an increasing number of researches supported Hubble’s findings, the idea of an expanding universe became an undeniable reality.

If the universe was expanding, then it had to be smaller in the past, and there could even be a moment when the entire universe appeared as a tiny mass. A group of physicists who took these findings seriously, started theoretical research regarding the birth of the universe (that is, the space-time and all of the matter within) and its evolution.

Another group of physicists still thought that the universe should have no beginning and insisted in their conception of a static universe. One of these physicists, Hoyle, made a statement during a BBC radio program in order to criticize the idea of an expanding universe and used the phrase “big bang” for the first time.

Later on, the phrase, initially used in a sarcastic manner, started to be used as the name of the expanding universe model. It was an entirely new model no scientist had even imagined before.

Accordingly, there had to be an electromagnetic radiation (cosmic microwave background radiation) which would emerge after the explosion—this can be compared to the smoke of a gun right after a fired shot. After Penzias and Wilson observed this electro-magnetic radiation in 1964, the doubts about the model disappeared almost completely. As technology developed over time, so many different observations and sensitive measures were made and taken in support of this theory.

Since there is no other cosmological model to explain the present data, the Big Bang model has general acceptance among physicists today. We would like to relate some facts about the universe based on contemporary observations and theories before we expand our discussion.

What we know about Universe

Galaxies are typical formations throughout the universe. The Milky Way galaxy, which hosts our solar system, is a disc-shaped one. The measurements revealed that the diameter of this “disc” is 100,000 light years and its thickness is 1000 light years (one light year is approximately ten trillion kilometers).

There are approximately 100 billion other stars in the Milky Way galaxy similar to our sun. Owing to gravitational attraction, the number density of the stars near the center of the galaxy is higher—for the same reason, black holes are thought to exist in the centers of galaxies.

The stars visible to the naked eye at night are the ones within the Milky Way galaxy. When further distances are observed through telescopes, other galaxies begin coming to sight as bright spots. Galaxies form galaxy clusters and the clusters form super-galaxy clusters. Even light year appears to be an unimportant unit of measurement in order to express these dazzling great distances. The most successful model we know that describes the universe is Einstein’s theory of relativity.

According to this theory, space-time is a dynamic object and it can be curved. As for the force we feel as gravity, it is an outcome of the curved nature of space-time. The Big Bang model appears naturally within the general Theory of Relativity. The essential data we are going to relate here about the universe is mostly based on observations and general theory of relativity.

According to the Big Bang model, the universe was born in a very hot and dense form nearly 13.7 billion years ago. Here, we need to remember that the concepts of “time” and “space” as we know them came to being with the Big Bang. Therefore, asking what was there before the Big Bang is meaningless for this model.

Similarly, the common notion of expansion brings to mind something expanding inside something else. However, it is possible to describe the universe without any notions of inside or outside expansion. That is, we do not have to assume another environment inside which the universe expands.

One of the important suggestions of the Big Bang Model is the fact that the universe was at a state of thermal equilibrium in the past. There is important data based on observation in support of this suggestion. Therefore, even though the term Big Bang brings to mind a chaotic happening, there was a very important state of equilibrium at the emergence of the universe.

So many physicists have underlined the fact that this state of equilibrium is impossible to happen on its own. Our universe was born out of a very hot and dense state of equilibrium and it began to cool down as it expanded. The heat in the early periods was so high that matter was found in a plasma state formed by the smallest constituents of matter. As the heat decreased, the plasma also changed structure and different cosmic phases took place. For instance, when the heat dropped down to 1010 C atomic nuclei began to form out of neutrons and protons.

When it dropped to 3000 C, atoms were formed. There are many observations in support of these different phases. For example, the electro-magnetic background radiation observed by Penzias and Wilson in 1964 is formed out of photons (i.e. light) released after the phase in which the first atoms are formed.

The Big Bang model has so many more important details and the calculations made according to this model have been in conformity with observations. Together with that, it should be noted that as the known physics get closer to the moment of the bang (zero time), it loses validity and new theories are needed.

The expansion of the universe in the Qur’am 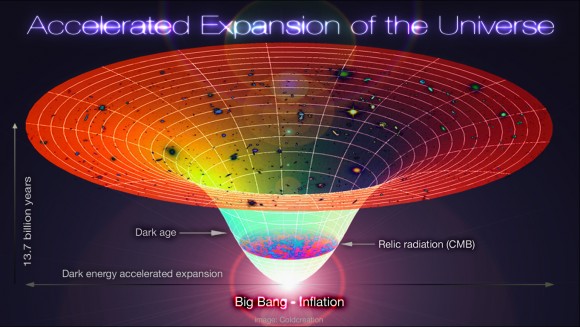 The Qur’an openly refers to the expansion of the universe. The 47th verse of the 51 chapter (Dhariyat) is translated as follows:

And the heaven, We have constructed it mightily; and it is surely We Who have vast power, and keep expanding it. (51:47).

The original Arabic phrase used, which refers to expansion, is “musiun.” The interesting point is that the sentence is a noun clause which denotes in Arabic grammar a quality of being steady and continuous. Therefore, the meaning can be understood as being “we are expanding it continuously.”

According to the Big Bang model, the universe has constantly been expanding ever since it was born. Expressing this fact by saying “We are expanding it,” the Qur’an also guides us to acknowledge that the expanding does not happen in itself but is realized by Divine power.

Other verses related to Big Bang

The 30th verse of the chapter Anbiya is translated as follows: 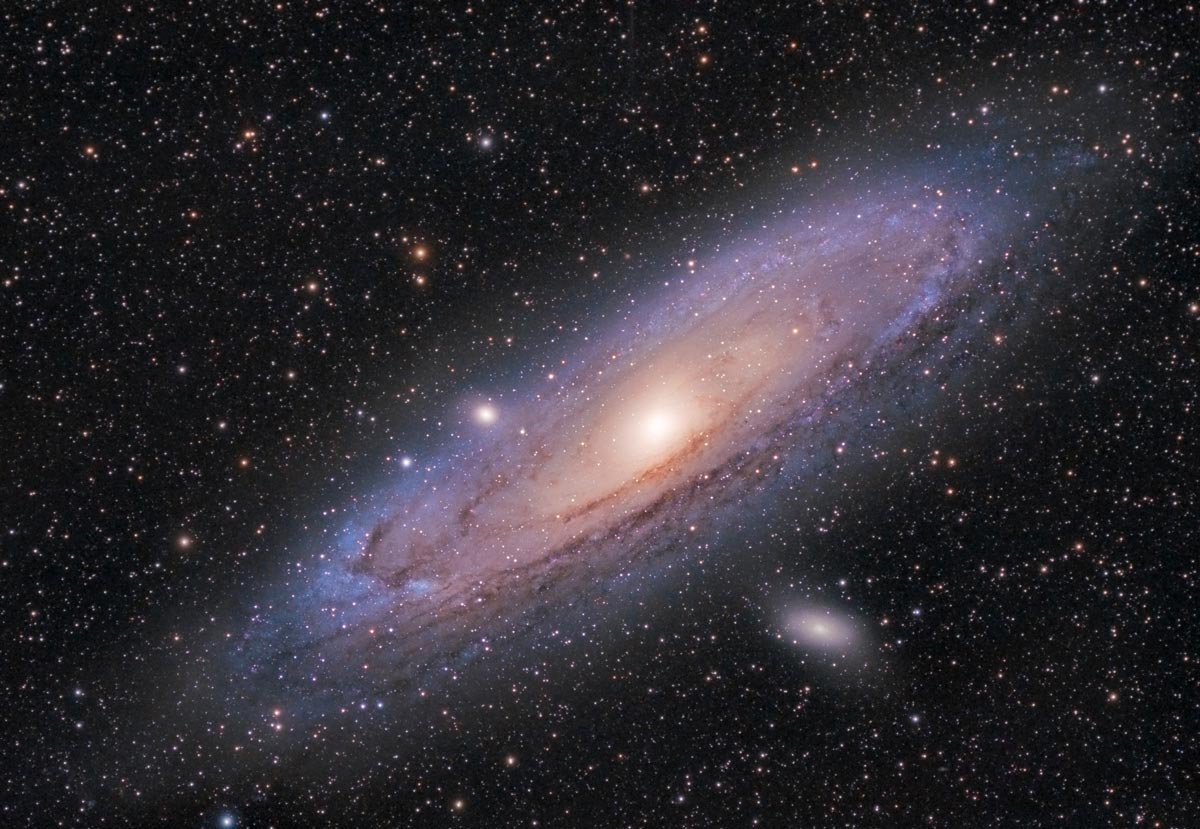 The Big Bang model appears naturally within the general Theory of Relativity.

Do those who disbelieve ever consider that the heavens and the earth were at first one piece, and then We parted them as separate entities; and that We have made every living thing from water? Will they still not come to believe? (Anbiya 21:30)

According to some scholars of Qur’anic exegesis, the phrase ratq (joined together, one piece) and fataqnahuma (We parted them) can be alluding to the moment of the Big Bang. As we have tried to summarize above, the entire universe was a single and very small mass and then started to expand and grow. As the universe expanded, the matter it contained began to expand and occupy a larger volume. As the universe expanded, its contents also began to separate from one another.

It should be noted that systems forming within galaxies are also considered in the Big Bang model, which is used for referring to all of the phases from the time of zero to ours. Therefore, both possible explanations can be related to this model.

Another phrase which can be related to the Big Bang is the “Originator (Fatir) of the heavens and the earth” used in many different verses (e.g. Yusuf 12:101). Similarly, there is another verse expressing this reality with a verb from the same root (fatarahunna): …your Lord is the Lord of the heavens and the earth, Who has originated them each (Anbiya 21:56). Normally the phrase “fatara” is translated as “created.”

In his study of Qur’anic exegesis (not available in English), Hamdi Yazir (1877-1942) points to the fact that the root “fatara” means to “split” or “split lengthwise,” and to originate something for the first time without a prior model. When these meanings of “fatara” are taken into consideration, “Originator (Fatir) of the heavens and the earth” can be an allusion to the Big Bang. Let us remember the fact that the Big Bang particularly refers to the very moment of the first creation.

Therefore, the meaning “to originate something for the first time without a prior model” might be referring to this quality of the Big Bang. In addition, the word “split” expresses the moment of this great explosion better than the word “bang”; and so the beginning of space-time can be compared to splitting of a seed and its emergence.

One of the alternative meanings of “fatara” mentioned by Yazir, “split lengthwise” is very interesting. One of the important misconceptions about the Big Bang is to imagine that the universe was born in a certain spot and began expanding within another space. The Big Bang did not take place at a single spot.

According to our theoretical understanding today, the entire space came into being altogether in a single moment. In other words, the Big Bang took place everywhere. When we consider the meaning “split lengthwise,” it might be an allusion to the fact that the Big Bang did not take place at a single point.

Considering the points we have tried to summarize above, the Qur’anic verses related to the creation of the universe can be defined as evidently miraculous. Surely, it is possible to expound on the subject from different aspects. For example we can think about a relation between the phrase “the seven heavens” used in many different verses in the Qur’an and the different phases after the Big Bang (although it is not possible pinpoint the exact number of these phases, figures like seven or seventy are metaphorically used in Arabic for referring to something in relevant multitude).

Or they might be referring to some extra dimensions suggested by certain theories (The String Theory, one of the most-studied theories in recent years suggests the existence of seven extra dimensions).

Finally, we would like to underline that this article is an elementary attempt. What needs to be done more seriously is to form a board of scholars, particularly from the fields of cosmology and Qur’anic exegesis, and evaluate systematically all the verses related to the subject, and then try to analyze and understand them without any biased opinions. Such a study can provide deeper insight into the Qur’anic message.