Technology and scientific discoveries have brought humanity to a stage where almost ‘nothing seems impossible’.

Genetic diseases which haven’t been found to be curable till today, or at least will require unprecedented costs for their continuous treatment, are now more or less avoidable and preventable.

A relatively new and sophisticated technique called the Pre-implantation Genetic Diagnosis (PGD) has been successfully used now in a number of countries to ensure that mothers will deliver only healthy babies.

The very basic idea is that for couples with fertility problems and those with certain genetic diseases (or are at least carriers themselves), they can opt for an in-vitro fertilization (IVF) as an assisted technique for pregnancy.

Genetic screening can be done to their embryos to know whether the baby will carry the disease(s) or not.

So if the embryo is found to have defective genes or chromosomes and is most likely to inherit the genetic disease(s) from the parents, it will be discarded. On the other hand, if it is free of genetic diseases, the embryo will undergo the next process which is implantation into the mother’s womb.

How Is It Done?

The IVF technique requires that the women’s egg is taken out from the body (a procedure called oocyte retrieval) and preserved in a suitable environment in the laboratory. The man’s sperm is then introduced to the ovum to allow fertilization.

On the third day of fertilization when the embryo has multiplied and now consists of six to ten cells, one of the cells (a single blastomere) is removed (by a very delicate technique) and assessed.

A lot of information can be obtained from the single cell such as the presence of defective chromosomes which may lead to genetic or inherited diseases, the risk of getting certain diseases later in life, sex, and other traits.

The most common genetic analysis tests employed for this assessment are Polymerase Chain Reaction (PCR) and Fluorescence In-Situ Hybridization (FISH).

PCR is used to detect single-gene defects such as cystic fibrosis, Tay-Sachs disease, sickle cell anemia, and Huntington disease, while FISH is beneficial for aneuploidy screening and sex detection in X-linked diseases (Dayal, 2013).

This however doesn’t mean that the PGD technique can absolutely eliminate the risk of genetic diseases or that the baby is guaranteed to be completely disease-free, owing to the fact that like any other methods, PGD has its own limitations and rate of accuracy.

Nevertheless, it has been proven as a very successful method of reducing the risk of transmission of genetic diseases from parents to children. 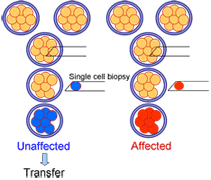 The advantage of PGD is that it serves as a better alternative to ante-natal screening for detection of genetic diseases or congenital malformations. The traditional methods of this screening, amniocentesis and chorionic villous sampling are usually done between 12 to 16 weeks of pregnancy and if the result is unfavorable, parents are left with the most difficult choice – to keep the baby or abort the pregnancy.

As PGD is performed at a much earlier stage (before pregnancy happens), this gives parents more freedom and a sense of moral comfort in making decision(s).

There are several other uses of PGD, some of which can be considered as beneficial and some rather controversial.

This usually happens when the couple has another child who suffers from disease(s) such as thalassaemia or leukemia and is in need of a potential donor to cure his condition.

How Does Islam View PGD?

One of the fundamentals of Islamic teachings is the ‘Objectives of Islamic law’, known as Maqasid al-Shari’ah. This refers to the act of achieving benefits for human beings and protecting their interests against any kinds of harm.

Most Islamic jurists seem to agree on the permissibility of stem cell research (Fadel HE, 2007) and further exploration of scientific knowledge as long as they are done with the intention of improving men’s quality of life, don’t conflict with other Islamic rulings, and aren’t derived from forbidden sources (haram).

In Islamic jurisprudence, there is a general rule that all are considered permissible unless specifically and clearly prohibited.

Another rule is that, in matters when other invocations are silent, “where the welfare of the people resides, there resides the statute of God.”

Other applicable principles include choosing the lesser of two harms, if harm can’t be avoided, and the permissibility of forbidden things in case of necessity (Fadel HE, 2007).

Several studies have suggested that pre-implantation genetic diagnosis is deemed permissible by most Muslim jurists because of the advantages it can generate for men and their health.

Since the common debate among Muslim scholars is whether the soul is breathed into the body (foetus) at 40 or 120 days following fertilization, the issue of PGD being forbidden is very unlikely as it takes place even prior to implantation.

However, there is no doubt that the embryo deserves respect and cannot be simply discarded without valid reasons, because even though it is not considered fully human, it has the potential to be one. That is why the permissibility of PGD in Islam is restricted to specific circumstances.

The same goes to PGD performed to avoid sex-linked diseases and for mothers of advanced age who want only chromosomally normal embryos to be implanted. These are compatible with Islamic teachings as they serve the interests of humans, prevent diseases and do not conflict with other Islamic rulings.

On the other hand, some other controversial uses of PGD such as sex selection (without medical reasons), mere screening (pre-implantation genetic screening) just to ensure a healthy baby, enhancement of traits (by parents who want their children to possess a certain degree of beauty and intelligence), avoiding life-compatible diseases (e.g. deafness) and risks for late-onset diseases in the future are not allowed in Islam.

If the use of PGD is not restricted and governed by religious and ethical values, humans may tend to go overboard and exploit this technology for their selfish interests.

Imagine couples demanding for only ‘beautiful and brilliant’ babies and order the health personnel in-charge to simply discard embryos of ‘less quality’!

Imagine if PGD is commercialized and people begin queuing at health centers only to screen their potential babies who are without any risks of getting disease(s)!

Imagine if couples keep discarding female embryos until they get a male one! Imagine if only the rich and powerful have access to PGD and the poor can only watch helplessly!

Imagine if people ‘play God’ and reject any possibility of seeing deaf and blind children! Will men be happy if this world is inhabited only by ‘super’ humans?

Islamic teachings as reflected by the wisdom of Maqasid al-Shariah promote the study of science and exploration of technology for the betterment of humankind.

Some restrictions are similarly put for the sake of protecting men against harm which they may not be able to predict with their limited and finite knowledge.

In the context of PGD, there seems to be a consensus among those who have studied it that it is approved so long it is used for certain goals.

The circumstances in which PGD is forbidden need to be clearly understood, as it is meant to also guard human beings from falling into disillusionment, destruction, misery and regret.

This article was first published in 2016 and is currently republished for its uniqueness.