Olives | Olive is of a major economic and cultural importance in all the 21 Mediterranean Countries.
aaa

By the fig and the olive, by Mount Sinai, by this city of security. Verily, We created man in the best stature. (Surat At-Tin 95: 1-4).

Olives have been mentioned seven times in the Qur’an and their health benefits have been propounded in Prophetic medicine. The Prophet Muhammad (may the peace and blessings of Allah be upon him) is reported to have said: Take oil of olive and massage with it – it is a blessed tree. (Darimi, 69:103).

The olive, like the date, holds great value in ancient and modern culture. In the Mediterranean culture “it has served as everything from money to medicines for several thousand years” (Zwingle, 1999).

The dove holding an olive branch in its mouth has become a universal symbol of peace. It is said to have originated in the story of Prophet Noh (peace be upon him). The dove appeared as a sign that the flood, which had been sent as a punishment, would abate.

The oil of this blessed tree has also been cited as a symbol of goodness and purity and is used up to this day in anointing ceremonies in the Greek Orthodox Church.

The cosmetics industry, natural health practitioners and the culinary world are unanimous on the benefits of this delectable fruit, which bursts with flavor and health. The olive industry, which produced 460 million gallons of olive oil in 2000-2001, has grown tremendously as consumers worldwide are alerted to the benefits of this amazing fruit.

Olea europaea, the botanical name of the olive, has its origins in Asia and spread to the Mediterranean basin 6,000 years ago. The Mediterranean basin is the chief area of cultivation with Spain, Italy and Greece being the foremost olive-producing countries in the world. Olive production has also expanded to California, South Africa and Australia.

Olive production favors a winter-rainfall pattern. The olive tree is a hardy tree that grows to less than 10 meters. Temperatures below freezing are damaging to the trees. It is an evergreen tree with leaves that are pale green above and silvery below. The bark is pale grey and the flowers are numerous, small and creamy-white in color.

The fruit of the tree is a drupe with fleshy fruit and a hard stone. The color of the fruit varies from green (unripe) to black (ripe) as it passes through its growth stages. As the tree ages, it produces more fruit.

Olives are cultivated through grafting, the method routinely used to propagate fruit trees. The stem or bud of one plant is joined to the stem or bud of another to form a new plant. While it can take more than five years for a tree to start producing fruit, trees can be harvested annually and continue to produce fruits until they become old and hollow.

The manner in which olives are harvested depends on the type of olive, number of trees and the amount of time and money available. Several small-scale producers, often family-operated initiatives, continue to harvest olives by hand. 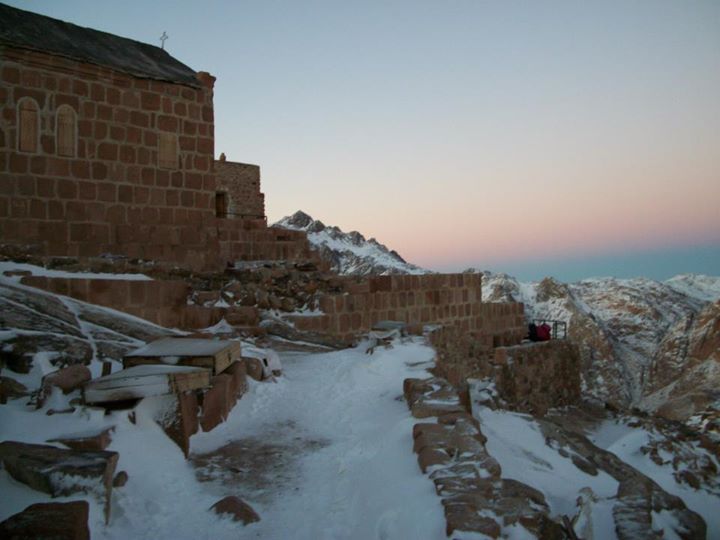 This is Mount Moses (aka Mount Sinai) which was referred to by Allah in Surat At-Tur in the Holy Qur’an. The mountain is located in the Egyptian city of Saint Katherine.

From this ‘blessed’ tree hardly anything is wasted as the fruits are eaten or used to produce olive oil, the leaves possess medicinal value and the wood of the tree is highly valued for carpentry work.

The Noble Qur’an refers to some of these uses: And a tree (olive) that springs forth from Mount Sinai, that grows (produces) oil, and (it is) relish for the eaters. (Surat Al-Mu’minun 23:20).

The oval-shaped olives, which are approximately 2 to 3 cm long, are preserved in salt solutions and sold as a condiment. Store shelves present an astounding array of olives from green and black varieties to stuffed olives. Even more mind-boggling is a perusal of the varieties of olive oil.

An olive contains 10-40% oil by weight. However, it also contains a bitter substance known as oleo-rubin, which is removed during processing. Zwingle (1999), writing for National Geographic on the wonders of olive oil, says that one finds “at one end, trillions of bitter little nubbins” and at the other golden liquid emerging.

Once the olives are crushed, the paste is then ‘pressed’ to yield the golden olive oil. The best olive oil is extra virgin as it is pressed without heating or adding any chemical solvents. Olive oil is marketed in several different ways, such as “virgin”, “refined” or simply “olive oil”. These have been further refined by chemical processes and could also have some extra-virgin olive oil added to enhance its flavor and color.

World olive oil consumption is rising at about 1.5% per year. The Mediterranean basin provides 99% of all olive oil.

One of the by-products of this process, released once the olive oil has been extracted, is widely used in soap making. Panayiotis Sardelas, a Greek soap-maker, interviewed in the above-mentioned National Geographic feature (Zwingle, 1999) commented: “The old people know that this soap is better than chemical ones. It lasts longer than other soaps, and you can use it for everything.”

Since the 1950s, the benefits of the Mediterranean diet, rich in olive oil, have been extolled. While it has always been promoted as being beneficial in lowering cholesterol levels (Assmanm and Wahrburg), it is now increasingly being linked to lowering blood pressure.

The medicinal and cosmetic uses of olive products are truly astounding. The oil is extremely nutritious and is recommended by dieticians to “improve the balance of fats within the blood” (Adams, 2001) as well as in lowering cholesterol levels.

A study by Dr. Ferrara and his colleagues of the Frederico II University of Naples, Italy (Ferrera et al., 2000) compared the effects of two similar low-fat diets on the blood pressure of hypertensive patients.

The patients on the former diet, all hypertensive, showed significant reductions in their blood pressure, thereby indicating that a diet, rich in olive oil, is not only associated with lower levels of cholesterol, but with lower blood pressure as well.

Another medical benefit of olive oil relates to the maintenance of a healthy digestive system. Oxford University’s Institute of Health found that “olive oil may have a protective effect on the development of colorectal cancer” (Stoneham et al., 2000).

Olive oil has traditionally been used to prevent constipation, assist in ‘cleansing’ of the gallbladder and in treating various ailments relating to the skin, such as burns, scratches and sunburn (Cook, 1934).

Cook, writing in the 1930s, said that, “Those who recognize its wonderful medicinal properties and the many uses to which it can be put will never fail to keep a bottle of pure olive oil in the house.”

Olive oil is also applied to the skin as it brightens the complexion, softens the skin and is used in the treatment of eczema and psoriasis (Khan). It is also used on the hair, especially problems relating to “dry hair and flaky scalp” (Adams, 2001). Furthermore, olive oil is used for massage and as a carrier oil when blending essential oils.

The leaf of the olive tree is commonly used by herbalists for its antiviral properties. It has been traditionally used to cool fevers by boiling the leaves and concocting a tincture that is then taken orally (Privitera).

Olive leaf was not only used to treat severe cases of fever, but tropical diseases such as malaria as well. Today, olive leaf extract is available from natural health practitioners and taken orally in a tablet form.

The Mediterranean basin provides 99% of all olive oil.

The benefits of the olive extend to its use as fuel for lamps.

This luminescent property of olive oil is powerfully illustrated in the following parable in the Noble Qur’an: Allah is the Light of the heavens and the earth. The parable of His Light is as a niche within it a lamp: The lamp is in a glass, the glass as it were a brilliant star, lit from a blessed tree, an olive, neither of the east nor of the west, but whose oil would almost glow forth, though no fire touched it. Light upon Light! (Surat An-Nur 24: 35).

Commentators of the Qur’an have provided different interpretations of the olive being neither from the East nor West. Interpretations include its extensive geographical distribution (being neither east nor west) and also its exposure and position in relation to the sun (it is exposed to the sun all day long).

The olive tree, one of the blessings of the plant kingdom, does not only have nutritional, medicinal and cosmetic value. Along with all of creation, it also fulfils a religious function as a sign (ayah) of Allah.

He it is Who sends down water from the sky; from it you drink and from it (grows) the vegetation on which you send your cattle to pasture. With it He causes to grow for you the crops, the olives, the date-palms, the grapes, and every kind of fruit. Verily! In this is indeed an evident proof and a manifest sign for people who give thought. (Surat An-Nahl 16:10-11).