Aloe | Aloe grows above ground used for above body complaints too.
aaa

It was reported by Abu Hurairah that the Prophet (PBUH) said, “Allah never inflicts a disease unless He makes a cure for it. …”

Then surely, if this were true, Allah would have also provided a way for these cures to be known. According to the Doctrine of Signatures He (SWT) has.

“And in the earth there are tracts side by side and gardens of grapes and corn and palm trees having one root and (others) having distinct roots– they are watered with one water, and We make some of them excel others in fruit; most surely there are signs in this for a people who understand’ (Surat Ar-Ra’d 13:4).

People using this healing tool believe that the key to the human use of plants was hidden in the form (signature) of the plant itself. Under this doctrine, plants are judged by their color, shape, location and growing situation and conditions to give clues on how to use them (Foster).

Signature plants were probably recognized from the beginning of time. However, the first published records we have of this method are found in ancient China where there was a classification that correlated plant features to human organs. 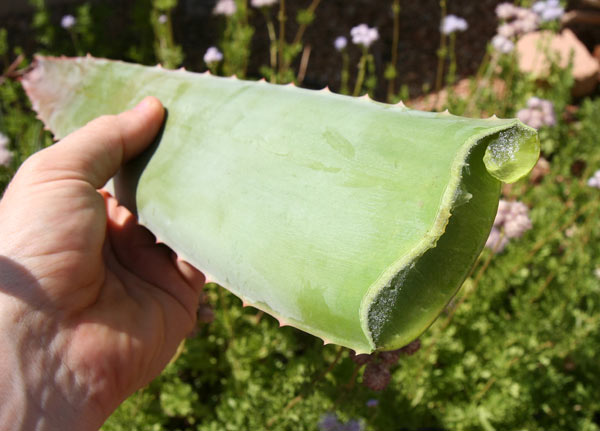 Gel of the aloe resembles fluids in the body.

Its black color could also be a hint for other uses it has as a plant – that of hair growth and as an all-around tonic. So, in the same way, black contains all the colors of the spectrum black seed contains all the healing tools of the world we need. This could why the Prophet stated that “There is healing in black seed for all diseases except death” (Narrated by Abu Huraira in Sahih Bukhari. Volume 7, Book 71, Number 592).

Ginger is another plant that could be significant because of its color. In the Qur’an, ginger has an elevated status as a drink in paradise (Surat Al-Insan 76:17) and was used by the Prophet Muhammad and his companions (Al-Akili, p.262).

Ginger has a yellow color, which indicates its use in the digestive system as well as with any yellowish fluids associated with the body. Interestingly, ginger is used for digestive complaints, increases the production of semen, and helps dry up yellowish mucus associated with flu and colds.

Aloe Vera, on the other hand, is a plant that grows above the ground, and as such was used for complaints in the upper body such as acid reflux, headaches, mouth sores, and other upper body complaints. The sticky fluid in the interior leaf is used on similar fluids in the body. Aloe is commonly used to purge corrupt fluids in the body in the liver, digestive tract or blood. Flowers, which represent the very tiptop of most plants, are often used for headaches and fevers.

Moreover, plants were also used according to where and how they grew. Desert plants were thought to be good for curing cold constitutional ailments such as sluggish lymph or blood circulation problems and plants growing near the water were considered good for watery illnesses such as lung congestion (Gordon).

The Prophet Muhammad once commented on the usefulness of watercress when he said, “what a beneficial cure both cress seeds and aloes have in common.” Using the Doctrine of Signatures, one could assume that watercress would be good for all complaints involving fluids or water retention in the body. In fact, watercress is used to clean excess fluids from all bodily organs such as the spleen and liver, it can reduce water retention in the body, it can act as an expectorant, releasing excess fluids from the lungs and it can stimulate the fluids of the menstrual periods.

The texture of plants is also considered in The Doctrine of Signatures. Plants with rough stems and leaves were believed effective to heal diseases that destroy the smoothness of the skin. Aloe can also be used as an example here, as it has sharp, pointed leaves, and yet it was used at the time of the prophet to smooth the complexion.

The shapes of plants were also taken into consideration. Flowers shaped like a butterfly became cures for insect bites. Hepatica acutiloba, a perennial wildflower that is common in the eastern U.S. Hepatica has a three-lobed leaf that supposedly bears a resemblance to the liver (James).

Because of this, herbalists believed the plant to be effective in treating liver ailments. Roots with jointed appearance were the antidote for scorpion bites in the time of the Renaissance (Boehme).

The sections of garlic are reminiscent of insects.

In The Medicine of the Prophet by Al-Jawziyya he recommends using Garlic, a plant with many sections and legs (resembling an insect), as a poultice for scorpion bites and bee stings (Al-Akili).

Even the patterns and variations of color on plants became a cure as to how they were used. Lungwort, due to the spots on its leaves was related to pulmonary complaints. The petals of the iris were commonly used as a poultice for bruising because the petals resembled bruised skin (Culpepper). Allah has placed these signs on the earth that we may heal by them. However, not everyone is aware of how Allah has made cures so accessible to all and so easy to figure out. For, “How many a sign in the heavens and the earth which they pass by, yet they turn aside from it?” (Surat Yusuf 12:105).

This article is from our archive, originally published at an earlier date, and now republished for its importance.