HOUSTON – No topic will be taboo when IslamInSpanish, a Houston-based non-profit organization, hosts its first-ever national convention December 23-24 in conjunction with the Texas Dawah Convention.

“For a lot of them this will be their first time attending this type of convention,” Nahela Morales, who will moderate a panel at the convention, told AboutIslam.net.

“At other conventions we’re given the topics we’re supposed to speak about. At this convention, we choose the topics.”

Some of the panel discussions will tackle tough topics facing Hispanic Muslims, including green card marriages, how to avoid them and other difficult experiences that might happen as a result of these types of unions.

Morales recently penned a blog on MuslimNannies.com about her experience being deceived and finding herself in a fraudulent marriage. She also frankly addressed some of the trials facing her as a single Muslim mother.

She spoke candidly about how unmarried Muslim women can sometimes be forced into tough situations not of their own making, yet they are left to deal with them alone.

In her own words, “In this day and age, Muslim mothers are often ostracized, deemed unfit to marry, or blamed for their circumstances.”

She said, although she received many positive responses from her piece, she did hear from one woman who chastised her for telling her truth and, in the process, casting a negative light on Islam.

Morales said these attitudes are part of the reason that discussing such issues at the convention is so important.

“We need to help people,” she said.

The convention will bring together Latino Muslims from all around the country including California, Chicago, New Jersey and Dallas. 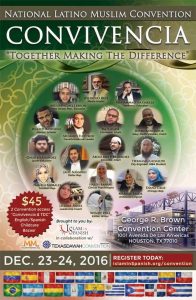 In addition to the dangers of green card marriages, convention goers can take part in a number of panel discussions.

Issues of destiny, dealing with trials, and meshing Latino and Islamic culture are just of the few topics to be broached.

These issues will be addressed by a galaxy of Latino Muslim educators, activists, imams, scholars, writers and translators including media analyst Wilfredo Ruiz and Muhammad Isa Garcia who has converted approximately 1,000 books from Arabic into Spanish.

Imam Daniel Abdullah Hernandez, head of the Pearland Islamic Center outside of Houston, will be among them.

“This convention is for all members of the Latino Muslim community, but it’s also about partnership,” he told AboutIslam.

Morales agreed. She said it’s not only the Hispanic Muslim community that has come together to support the convention, but they’ve seen great cooperation from the Houston Muslim community at large.

In fact, when queries were made at many area mosques, the community responded generously with enough donations to provide for buses to transport people from around the United States to the Houston convention.

Continuing the theme of partnership, some convention speakers are non-Latino, including clinical psychologist Haleh Banani and Andalucia linguist Mariam Saada.

For more information about IslamInSpanish or to register for both the Texas Dawah Convention and the National Latino Muslim Convention – at a cost of $45 – log on to www.islaminspanish.org./convention.

The website also details a complete timeline of talks, panel discussions and other events set to talk place over the two-day convention.