NEW YORK – Starbucks announced Tuesday it will close 8000 US stores for one afternoon to offer staff training on racial tolerance, in response to a widespread condemnation and boycott call following the arrest of two black men in a Philadelphia store.

“I’ve spent the last few days in Philadelphia with my leadership team listening to the community, learning what we did wrong and the steps we need to take to fix it,” Starbucks CEO Kevin Johnson said in a statement cited by The CNN.

“While this is not limited to Starbucks, we’re committed to being a part of the solution,” he said.

“Closing our stores for racial bias training is just one step in a journey that requires dedication from every level of our company and partnerships in our local communities.”

The company said that it would also provide training materials for non-company workers at the roughly 6,000 licensed Starbucks cafes that will remain open in locations such as grocery stores and airports.

Sherrilyn Ifill, the president of the NAACP Legal Defense and Education Fund, and Jonathan Greenblatt, CEO of the Anti-Defamation League, will also help design the program, as will executives from the Equal Justice Initiative and Demos, the progressive think tank. 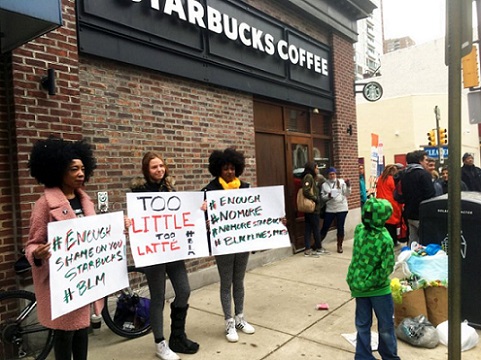 Protesters gather outside a Starbucks in Philadelphia, Sunday, April 15, 2018, where two black men were arrested Thursday after Starbucks employees called police to say the men were trespassing. (AP Photo/Ron Todt)

The announcement from world’s biggest coffee company comes as it tries to cool tensions following the widely-condemned Philadelphia incident that sparked accusations of racial profiling and led to a boycott campaign on social media.

Johnson has apologized for the “reprehensible” arrests of the two men in Philadelphia on Thursday and took personal responsibility for the incident.

Starbucks attorneys said Johnson and the men, who were released without charges, have “engaged in constructive discussions about this issue as well as what is happening in communities across the country.”

“It’s good that Starbucks is giving all staff race training on May 29. But let’s not lose sight of the real problem which is police accountability,” Tiffany Dena Loftin, director of the youth and college division at NAACP, told Reuters.

Islam’s arrival was really a turning point in the battle against discrimination. Islam was able to change people’s beliefs and behavior to a huge extent. A few decades after the death of the Prophet, leaders from all spheres of the Muslim community, whether political, scientific, or spiritual, were from different tribes and nations without regard for their color, or racial origin.

Humanity is in dire need for such a blessed guidance to eradicate the discrimination that continues in our society today. Educators, political leaders, and community leaders have a rich pool of resources to use in the battle against discrimination.