NEW JERSEY – An American Muslim engineer is dedicating his life to fight hunger in the United States, setting an example of how true Muslims should be.

“There are hungry people around me, and I don’t even know that they are here,” Zamir Hassan, a retired software engineer in New Jersey and the founder of Muslims Against Hunger, told Mvslim.com.

“As a Muslim, I am not supposed to go to bed if my neighbor is hungry. I started reflecting on that, what kind of Muslim I am?!”

Hassan started combating hunger in 2000 when he chaperoned his son’s school to a soup kitchen in a wealthy neighborhood in New Jersey.

Meeting with his friends at mosque to suggest food choices, he opted to present the oriental food they eat in their houses, including tandoori chicken, samosa, baklava, and other oriental dishes.

Now, their soup kitchen serves various cuisines depending upon what the volunteer cooks eat at their houses.

Spreading his idea of volunteerism and charity, Hassan used to invite his friends to his house, take them in a short trip, where they volunteer to cook and serve food.

When they finished volunteering, he drove them back to his home for an oriental dinner. The experience of volunteering at the soup kitchen usually enraptured his friends, so they would ask him to invite them again to help.

“My goal is to engage Muslims in their communities. I want to change their mindset. They have to live their religion, not only practicing it,” Hassan said.

According to Do Something Organization, fifty-four million people suffer hunger in the US sarcastically, the organization states that 40 percent of food is thrown out in the US every year.

Hassan defines hunger similar to the United States Department of Agriculture definition of hunger or food insecurity as “the lack of access, at times, to enough food for all household members.” 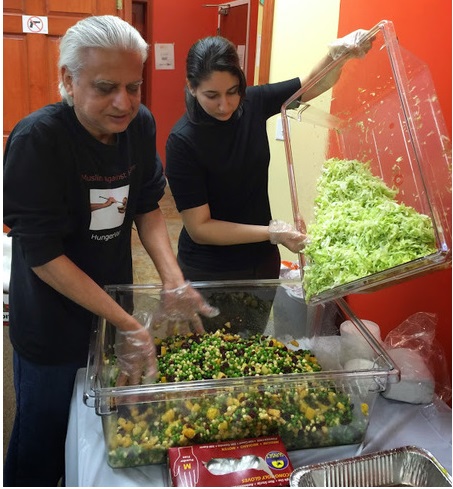 Hassan sees that Islam is not merely about rituals and building mosques but about daily charity, similar to the Muslim’s five daily prayers. He based his opinion on the continuous pairing of the prayer with charity in the Qur’an. Therefore, he founded various programs to fight hunger.

In 2011, Hassan started the “Hunger Van” program, a mobile version of the soup kitchen.

The program is designed to reach the needy instead of waiting them to come to the soup kitchen. Accordingly, the local volunteers register on the Hunger Van website, and Hassan drives the van to them where he teaches them how to prepare his sandwiches. Hassan makes two types of sandwiches which he calls them honey bee sandwich and peace sandwich.

Then, they drive the van to the local areas where the volunteers know that there are homeless people and hand them the sandwiches.

Because other religions stepped up, Hassan expanded Muslims Against Hunger and initiated Faith Against Hunger, an interfaith program for combating hunger.

“Hunger has no religion,” he said.

Last year, a Hindu Sunday School in New Jersey invited him to teach a class about charity. In addition to the paucity of the volunteers, he struggles with the funding and endures from politics.

To continue his advocacy efforts, Hassan travels across the states with his Hunger Van to teach people how to set up a soup kitchen.

He wishes to establish a soup kitchen at every mosque, and for every Muslim to practice charity by feeding others on a daily basis. While tapping his fingers on the table, he concluded: “It is about time that we walk the talk. Stop talking. Walk the talk.”