NEW YORK – American Muslim civil rights activist Linda Sarsour has bravely shared a disturbing rape threat email sent to her by a stranger, as she faces a vicious hate campaign over her use of the word jihad in a recent Islamic convention.

“When folks claim I follow a violent religion but send me these types of emails. #TheIronyIsStartling,” Sarsour wrote on twitter to her 221,000 followers, Metro reported.

Sarsour, a co-chair of the historic Women’s March on Washington, shared the hate-filled email in which the writer said he hoped someone will rape the former executive director of the Arab American Association.

The message, which had the subject heading as ‘Sharia’, also contained a highly offensive comment about the Qur’an, which was misspelled by the writer.

The email read: “You are a vile and disgusting ***t. I hope some one will rape you.” 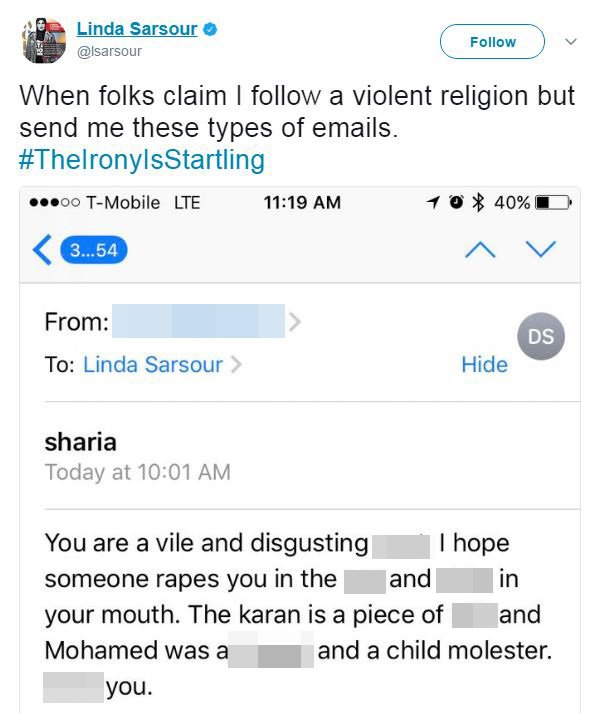 Sarsour has been targeted by right-wing and Islamophobic extremists in a manufactured “controversy” over remarks referencing “jihad” she made recently at a national Islamic convention in Illinois.

Sasour is one of the five organizers behind the Women’s March on Washington, a global movement of rallies and marches in protest of President Donald Trump’s agenda.

While some Twitter users continued to respond to her link with racist and Islamophobic abuse, others rallied to support her.

Rebekah Kochan wrote: “I’m so sorry. This is horrible.”

Another Twitter user, Juliana, wrote: “Absolutely disgusted when reading this email. I don’t understand how people have the mind and heart to type this horrific stuff.”