BASTIAAN SLABBERS / For the Inquirer
aaa

Just like dozens of her community members in Texas, Bianca Guerrero has recently attended an Islamic program at Al-Hidayah Mosque in North Philadelphia hosted by a Hispanic organization called ‘Islam in Spanish’, The Inquirer reported.

“My decision didn’t go over well. I got kicked out of the house. My situation isn’t unique,” said Guerrero while recalling her Christian family’s response after her conversion to Islam when she was 19 years old.

The family of immigrants from El Salvador traveled to South Florida. Guerrero is now 35 and lives in West Philadelphia. Fortunately, Guerrero’s family “eventually didn’t only come to accept her decision. In fact, both her mother and older sister converted to Islam too.”

The Muslim Latino woman receives Qur’an copies, pamphlets, and videos from ‘Islam in Spanish’ organization which formed in 2001. According to the group, there are 250,000 Latino Muslims in the USA.

‘Islam in Spanish’ helps people who want to learn about Islam in their native language. Since 2016, they helped as much as 160 Spanish-speakers converts to Islam in Houston.

Jaime Mujahid Fletcher, a Colombian-born convert is a founder of ‘Islam in Spanish and he “plans to open a new Centro Islámico mosque in Houston.”

The organization’s April program coincided with new statistics released from the Washington, DC-based Institute for Social Policy and Understanding that show Hispanics are the fastest-growing group in the USA to embrace Islam.

“That’s a 700% growth in less than 10 years, and no other group has grown at this rate,” said Dalia Mogahed, the institute’s director of research. Among other findings in the survey: Hispanics and Jews hold the most favorable views toward Muslims, while white evangelicals hold the least favorable. 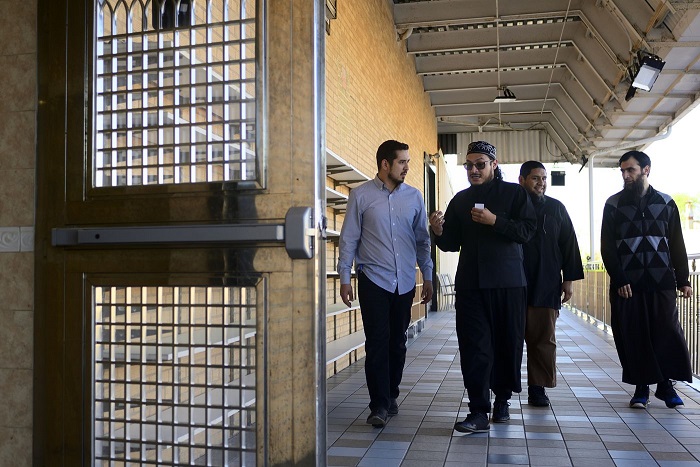 BASTIAAN SLABBERS / For the Inquirer
From left to right: Jalil Navarro, Ahmad Jose, and Imam Isa Parada (the fourth man is unidentified) are heading in for the afternoon prayer at Masjid al-Hidaya mosque, in North Philadelphia.

Mogahed explained that “the reasons people who convert give as to why they are attracted to Islam are that Islam emphasizes a personal and direct connection with God without the interference of an institution or clergy.”

Other reasons that Latinos have converted to Islam are varied: from the “hip-hop culture of the 1990s when teenagers wore Malcolm X hats and read about the civil rights leader”, to spiritual searches for a religion that rings true to them, to a “resurgence in Latinos exploring their partial or full Andalusian roots, when Muslims governed Spain for 800 years until 1492.”

Imam Isa Parada, leader of a mosque in Houston where sermons are in Spanish says: “I tell people that Islam isn’t as foreign as you think.”

“In fact, there are some 4,000 words in Spanish that derive from Arabic, the liturgical language of Islam,” the sheikh added.

According to Pew Research Center, Philadelphia has 1% Muslims in its population, yet City Councilwoman Maria D. Quiñones-Sánchez, who attended the April program in her district, couldn’t cite data on the number of Latinos in her area who have converted to Islam.

In fact, most American Latinos converted to Islam are women of Mexican or Puerto Rican origin who justify their conversion as a return to a pre-Hispanic and pre-Catholic Muslim identity.