LONDON – The murder of Imam Maulana Akonjee walking home after noon prayers in New York was treated in a casual matter-of-fact way. There was a reluctant unwillingness to acknowledge it as a hate crime, despite knowing that he had over $1,000 in his pocket and was not robbed.

By way of contrast, the response to the murder of Father Jacques Hamel in France hit the headlines immediately with the word ‘terrorist.’

The French murder was at the hands of Adel Kermiche and Abdel Malik Petitjean, while the American murder was by a man named Oscar Morel.

If the former ‘Muslims sounding’ men were inspired by a generation of disenfranchisement and a sense of empowerment by ‘terrorist ideologies,’ why can we not extend the same analysis to the latter, where we have witnessed as an immediate by-product of the current US presidential elections, an attitude towards the entire Muslim community reminiscent of attitudes towards Japanese Americans during WWII, or to African Americans throughout the years.

“We blame Donald Trump for this. Trump and his drama has created Islamophobia,” spoke Khairul Islam, a resident local to the mosque in New York.

Whether it is Muslims being removed from American airlines for no reason other than ‘looking Muslim,’ whatever a Muslim is meant to ‘look like,’ or the casual scapegoating of an entire community as a means of strengthening political influence, something must change.

Consider that the French who pride themselves with the richness of their culture and the insistence on freedom of thought and choice, so much so that they tolerate and encourage the often drivel spewing publication Charlie Hebdo whose editor, Charb, said, “I’d rather die standing than live on my knees.” But at the same time, when a woman on a beach chooses to exercise the same ‘freedom’ by dressing in a different way, in a burqini, it is suddenly, a threat to (French) freedom and democracy? 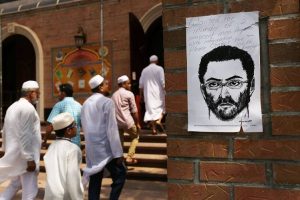 When times are hard, we all suffer from insecurity. But in recent years, we have seen the normalization of hate and anger. You would expect this much from a dictator, but when individuals, groups and communities claim to speak of human rights, values and freedoms with one breath, then deny a population with the same rights, and freedoms with another, it is evidence of how little these values actually mean to those who speak of them.

This group synch, a desire to appeal to the masses while ignoring fact, either as a means of making you feel better, or to impart blame, is sadly, no better reflected than by the former Mayor of NY, Rudy Giuliani, who in desperation to demonstrate party political loyalty, shamefully announced that in the years before Obama had been elected President, there had been no major terrorist attack in the United States.

Did he forget about 9/11 which did take place before President Obama, and actually took place during his time as Mayor of New York? He has sold his soul for a cheap price.

Thankfully, and by way of contrast, today’s Mayor of New York, Bill De Blasio, who during the funeral of the murdered Imam and his colleague spoke the better of American values, that ‘An attack on one of us, is an attack on all of us.”

It is not the homogenization of humanity into a singular ethnic/cultural/spiritual mindset which allows us to flourish, to grow, to be beautiful. Rather, it is the diversity in which we have been created, that enables us, as God says in the Qur’an, ‘I have created humankind in different communities, so that they can get to know one another.’

Our goal as humanity should be societies around the world, which opt to flourish because of their ethnic, cultural, spiritual diversity. Societies that do not discriminate against or stereotype their citizens, because others amongst their citizens are engaging in unjust behavior. For us to become better, we must adopt the same standards across the board.

We should not allow our prejudices or deliver injustice to any of our neighbors – whoever they are, whatever they look like, whatever they believe. From a Muslim perspective, this is exactly what Prophet Muhammad (peace be upon him) tried to create in his Constitution of Madinah; this diversity of life is clarity of direction from his Sunnah (his example).

So whether we remember the murder of an Imam in NY or a Priest in France, let us consider the importance of putting humanity first, with freedom, fairness and justice for all. And let us have the courage to protect one another from those spew hatred as a means to divide us, amen.