The plaintiffs in the case include the NCCM, the Canadian Civil Liberties Association (CCLA) and Ichrak Nourel Hak, an education student who wears hijab.

“This law has stripped me of my dream and sends me a clear message that I am not a valued part of Quebec society. All my years of studying, all my efforts to be among the best teachers in Quebec went up in smoke in a snap. Being a hearing-impaired woman, I had to work far more than all my colleagues to get where I am today. However, this law has just cut off my wings.”

The bill, introduced by the Coalition Avenir Québec government, passed after a marathon weekend of deliberations at Quebec’s National Assembly. 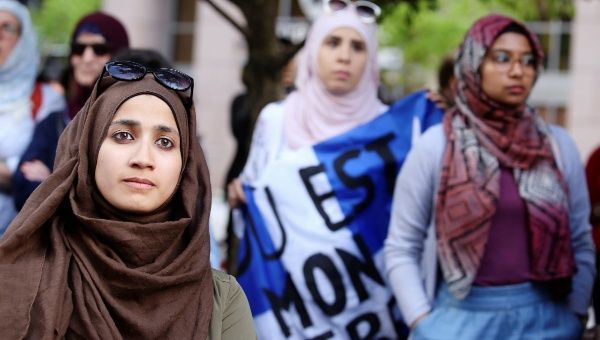 Though Muslims are the biggest group affected by the controversial bill, for banning Hijab, the bill also bans Jewish skullcaps, Sikh turbans, and Catholic crosses, among other symbols.

“As of last night, the Quebec government has legalized religious discrimination – and we won’t stand for it. This shameful law is a black mark on the progressive and inclusive province that we know Quebec to be,” said NCCM’s Executive Director, Mustafa Farooq.

“It will upend people’s lives and livelihoods, pushing many Muslims, Jews and Sikhs to the margins of society in an already-tense time when Islamophobia, anti-Semitism and other forms of racism are on the rise. That is why we will be taking immediate legal action to prevent state-sanctioned second class citizenship,” he added.

“Equality and freedom of religion are universally recognized human rights, and foundational principles in the Quebec Charter of Human Rights and Freedoms. This is why we are fighting the law in court, and why we stand with those who oppose it,” said Noa Mendelsohn Aviv, Equality Director at the Canadian Civil Liberties Association.

The new bill was already affecting the Muslim community negatively after a Montreal Muslim women’s organization report in May said there had been a sharp increase in Islamophobic incidents after the bill was tabled.

Several Muslim women have told CBC Montreal about being spat upon, harassed or denied public services in recent weeks.