CALGARY – As Calgarians woke up to a lazy Sunday on Christmas day, around 100 members of the local Muslim community took to the streets to clear up snow from sidewalks and driveways, helping their neighbors to enjoy the holiday season.

“They are just so humble and kind,” Calgary resident Cindy Russell told CBC on Monday, December 26.

Russel recalled the emotional encounter with members of the Islamic Association of Northwest Calgary (IANWC) on Christmas day.

She was returning home from her mother’s place on Christmas morning to grab a few things when she found the IANWC members in front of her house.

“I came home and I pulled up to my house. They were quite young. They asked if I lived there,” Russel said.

The Muslim group were simply clearing up snow from sidewalks and driveways.

They also hand out chocolates and flowers to their neighbors.

This is not the first year for the IANWC’s event.

It has been going on for the past five years with young members of the group hitting their neighborhood streets on Christmas Day to clear up snow and ice accumulated on sidewalks and in driveways. 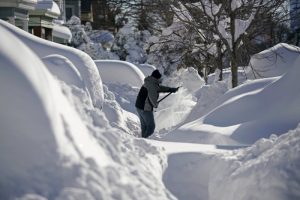 The effort comes as a number of mosques in Calgary have been vandalized over the past few months.

In October, someone smashed the glass on the front door of the Ranchlands Mosque and threw away the “Open” sign out on the road.

Weeks earlier, another Islamic Centre in Queensland had to deal with broken windows, a burnt Qur’an and a hateful letter.

“IANWC firmly believes in harmony, peace, and love for everyone in and around our neighborhood,” IANWC Chairman Dr. Abdur Rahman said at the time.

Despite being targeted, about 100 members were out and about shoveling snow off the roads this year.

“They shovel snow in the neighborhood. They share the best wishes of the season with our neighbors,” said Muhammad Abbas, the outreach director at the association.

“We want to make a positive contribution to our community.”

Russell believes this kind gesture could not have come at a better time, “especially right now with all the dialog going on around the world.”

“There is so much fear and ignorance and a lot of people who are afraid just haven’t taken the time to educate themselves,” Russell explained, thanking the group.

“Thank you for showing me the real purpose of this time of year, which doesn’t belong to any religion. It’s time to express love, concern and interest for each other.”