MADINAH – A 5-year-old blind Burmese child in Jeddah has memorized the entire Qur’an by listening to radio, the discovery that came as a surprise to the father.

Hussein Mohammad Tahir, visually impaired since birth, made the achievement three years after his father bought him a radio, knowing that his son would not be able to watch TV.

“I didn’t even imagine that this child would benefit from the radio by memorizing the Qur’an,” the father, Mohammad Tahir, told Arab News on Thursday, August 18.

The father said he fixed the frequency on a station, which broadcasts the Qur’an 24/7 so that his son can develop the habit of listening to Qur’an’s teachings.

For three years, Tahir did not realize Hussein was memorizing the holy book through the radio.
When the father moved from Jeddah to Madinah, the child asked him to take him to the Prophet’s Mosque.

The condition for taking him there, said the father, was to recite a few verses from Surah Al-Baqarah, the second chapter of the holy Qur’an.

To the surprise of the father, the child recited the entire surah by heart.

Afterwards, Mohammad Tahir took the child to several teachers and people who had memorized the Qur’an to confirm that the child had completely memorized the holy Qur’an.

Confirming the child’s achievement, they said he only needs some lessons in recitation.
Hussein was admitted to a Qur’an memorization circle of visually impaired children in the Prophet’s Mosque. 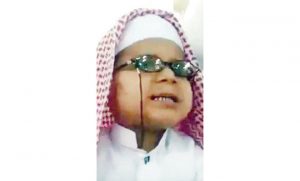 “This makes me forget all the hardships he endured over the years, having been born blind and with some disability in a hand,” said the thankful child.

The Qur’an is a revelation from God, the creator of the worlds, so He is the original author.

There is only one Qur’an which is in Arabic and many translations of the Qur’an in several languages.

There could be multiple translations by different authors in the same language such as English.

The Qur’an was revealed to Prophet Muhammad (peace be upon him) through the archangel Gabriel who used to make the Prophet memorize the Qur’an and made him revise it every year in the month of Ramadan, the fasting month.

Memorizing the Holy Qur’an is one of the most important ways to preserve Allah’s message.

The others are to publish and distribute the book, or the text on the Internet and to recite the parts that one knows to other people.