Muslim pilgrims pray on Mount Mercy on the plains of Arafat during the annual haj pilgrimage, outside the holy city of Mecca September 22, 2015. REUTERS/Ahmad Masood
aaa

In this article, first published in 2017, a British Muslim reflects on his Hajj experience

LONDON – With British Muslims well on their way to begin and complete the spiritual rites of Hajj, an experience which should allow people from all walks of life to be in the same place together, irrespective of social standing, some have gone with family, others have gone alone, as Dr. Farah recounts her experience at London Heathrow Airport:

“And so it begins… 5:45 am start to the day and emotional farewells, especially from our eldest son. Lord Almighty, please keep him safe from adversity, answer his prayers, accept his Hajj and return him safely to us.”

A ritual whose reward is the removal of all sins, allowing a person to reset, to begin again, often has men and women the world over reaching out to their families, friends, even their enemies, seeking their forgiveness for an injustice that they may have endured.

Good humor is, of course, a trait encouraged by the Prophet and the companions, who often spent time making jokes and even playing pranks with one another. The hadith collector Abu Dawood relates at the end of one of his stories that ‘Later on when the Prophet was informed about this incident, he laughed. The Prophet and his companions continued laughing over this incident for a whole year.’

To this end is the case of Dr. Asad, who is traveling on Hajj with his sister, where he writes,

“Most of us have known each other for a very long time, and during that time a lot of things may have been said or done. Before I leave, I just wanted to take a moment to apologize to absolutely nobody!! We may have had our differences, but I want you to know it was 100% your fault!! ?”

There is, of course, a time for everything, and Dr. Asad continues,

“In all seriousness though, I would like to apologize for any wrongdoings between us. I want you all to know that you’ll be in our thoughts and prayers, and if you have any specific duas you would like us to perform, for either you or your family and friends, then please list them below. Take good care of yourselves and see you on the other side.”

“Juma prayers on the streets of Makkah. Boiling at 41 degrees!

It is likely you will have a stopover on your flight to Jeddah. If you can manage it try and make it a 12 or more hour stopover, book yourself into the airport hotel and get some sleep because nothing and I mean nothing will prepare you for the onslaught that is the Hajj Terminal in Jeddah. There’s a good chance you’ll be stuck in that birdcage for a very very long time with some of the worst toilet facilities and most challenging immigration officers you’ll find anywhere in the world!

4) The early Umrah on arrival (You’ll be so exhausted from the up to 30-hour transfer to Makkah that’ll make performing the Tawaf and Sa’i one more than challenging experience). Work on your distance walking beforehand.

Good News:  The time in Al-Haram was really nice. Umrah complete and my head is lighter for it!

Extra tip: try and book a non-shifting package that allows you to reside in a hotel walking distance from the Al-Haram. You will genuinely appreciate the flexibility of being able to travel back and forth to your hotel I promise you!

Extra extra tip: Even if you’re able to get 12-15kg of hand luggage from the UK to your stopover the destination, the airline staff at the airport are likely to stop you at the transit airport if you’re carrying large hand luggage weighing more than 7kg en route to Jeddah. You have been warned!!” 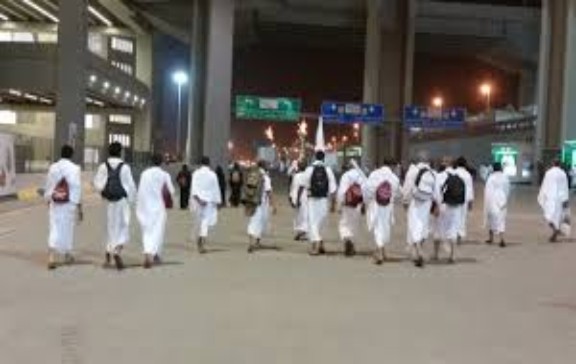 People often say that the hajj experience today is very different to that experienced in Arabia 1,400 years ago. This is indeed very true. But life around the world has also changed for many of us, thus the challenges we as Muslims, British or otherwise, face, will still be real, but within the context of how society has evolved over the generations.

As is clear with Dr. Asad’s journey so far, there has been no faffing around with camels in the desert, or complications with sand storms, and despite the convenience of hotels nearby, people will still struggle with the heat.

The Qur’anic commentator Ibn Jarir referenced Zuhri who observed that when the revelation of the Qur’an was suspended for some time in the early years, Prophet Muhammad became sad and depressed, so much so that sometimes he went to the tops of the mountains nearby and had thoughts of throwing himself off. But every time he did so, Angel Gabriel would appear and tell him that he was Allah’s Prophet, console him, and restore him to peace of mind. This continued with the opening verses of Surah al-Mudaththir were revealed: “O you wrapped up in cloth. Arise and deliver the warning, and praise and magnify the Lord.”

Similarly, for Muslims around the world, all of whom believe in a Loving God, a Merciful God, there are times in all of our lives when we do wrong, and we sometimes feel the accountability for our sins may indeed be quite difficult. One path – amongst others – for forgiveness, is for all of us to wrap ourselves in simple cloths and reach out to our Creator seeking God’s forgiveness, and the journey of hajj delivers just this.

While some have flown to Makkah, others, such as British Muslims Rashad Ali and Abdul Hannan, have cycled from London to Makkah. When and how many of us are invited to God’s house to experience this ritual, God alone knows. That Makkah today resembles little Makkah of 1,400 years ago also does not matter, for as Muslims we neither worship buildings, lands or structures, but instead, simply, the Creator, and we do so independent of the environment.

For those on their way or having arrived at Hajj, may your journey be as comfortable as possible, and may all of your good prayers be accepted. For those of us who have yet to be invited, may the invitation arrive sooner rather than later. Wrapped up in cloth, there, or wherever we are in this world, may we all praise and magnify the Lord, Ameen.