CANBERRA – Seeing Noora Al Matori, who was born in Iraq but grew up in Australia, Bogart Lamprey, an Australian countryman, knew she would be his wife.

“Every time I was in the shop I asked the elderly lady working there about Noora,” Lamprey told ABC.net.au.

“I got to know and understand the culture, I embraced it, I studied the Qur’an every night and converted to Islam,” he said.

“Then I asked Noora to ask her dad for a meeting to ask permission for her hand in marriage, and hopefully she would [then] consider marrying me.” 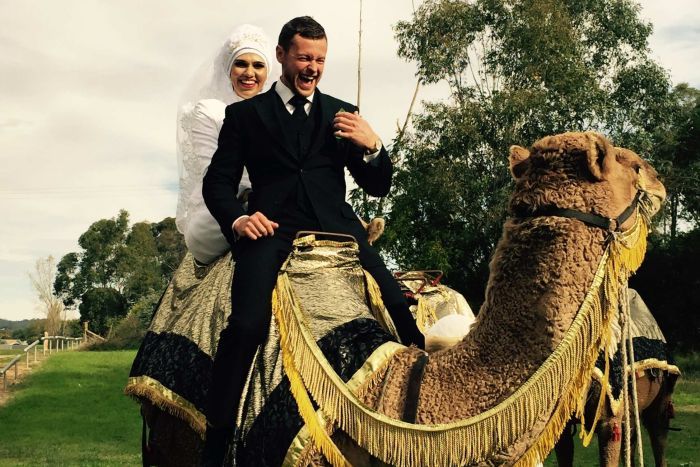 Photo: Noora Al Matori and Bogart Lamprey were overjoyed on their wedding day.

Lamprey had already met Al Matori’s family, but only as a friend.

“When I told my dad that Bo was interested in me and coming to ask for my hand, he decided to go on a holiday for three months and keep Bo on hold,” Noora said.

“He wanted to see if Bo was going to stay around or turn around and go.”

He stuck around, coming to a second visit with his family this time.

“As far as I’m concerned Noora’s mum is like my second mum,” he said.

“The way they treat me is just so good, it’s amazing.”

The couple have been happily married for almost four years and now live in Canberra. They have a girl, Jamila, who is three years old.

“I just want her to grow up and value herself the way we value her,” Lamprey said.

“If she turns out half as good as Noora, in terms of respecting herself as a human being, I’ll be the happiest man in the world.”

Muslims, who have been in Australia for more than 200 years, make up 1.7 percent of its 20-million population.

Islam is the country’s second largest religion after Christianity.

Islam does recognize happy occasions that bring people closer to one another and add spice to their lives.

However, Islam goes against blindly imitating the West regarding a special occasion such as Valentine’s Day.

Hence, commemorating the Valentine’s Day is an innovation or bid`ah (innovation) that has no religious backing.