NAIROBI – Kenya’s first-ever marriage conference has been held at the acclaimed Boma International Convention Centre. The one-day event, held Saturday, February 10, featured a host of international speakers and was aimed at addressing relationship and family issues particular to local people.

“The challenges are really different in very country we go into. There are cultural sensitivities to be aware of,” he said.

“Culturally it may be okay to go out dating (in Kenya) whereas in Islam we know where the line is drawn. Inter-cultural marriages are a big issue here, whereas they may not be in other areas.”

“The deputy chief Qadhis office is recording upwards of 120 Muslim divorces per month. How do we work around this? This is the first platform featuring experts of different faiths to explore the institution of marriage,” she said. 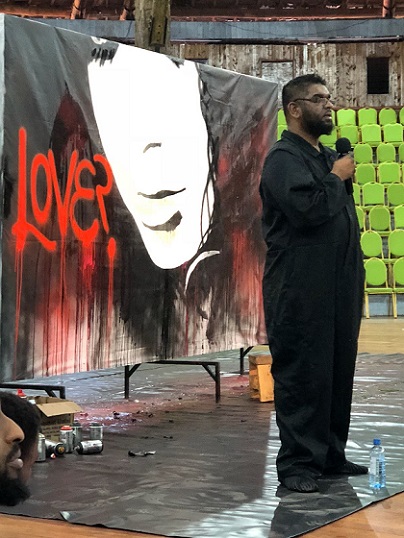 A new survey by Daystar University of 1200 people revealed the critical reason for Kenyans to separate is marital infidelity. Whilst “40 percent blamed divorce on the mother-in-law,” said Prof Waithima.

The most keenly attended element of the marriage conference was the halal matchmaking facilitation service ‘Soul Seekers’ where 28 young Kenyans found their potential ‘match.’

The Marriage Event ended on a serious note. In the main arena, Mohammed Ali MBE, Artistic Director of Soul City Arts, Birmingham, UK, hurled paintballs of red and black at a vast canvas, in a cloud of dry ice to a haunting background melody provided by youth mentor and nasheed artist Faisal Salah.

“Hopefully (this will) challenge us to think about domestic violence in a way we never have before,” said Ali.

The Kenyan government is consulting Hussein on the potential for premarital courses and an ‘institute of Marriage’ to tackle issues couples may face.

According to recent census figures, Islam is the religion of 11 percent of the Kenyan population or 4.5 million people.