If your child lies, try to find the reason behind his lying.
aaa

In his exegesis of Surat Al-Infitar, Sheikh Fadhlalla Haeri says, “Everything that slightly oversteps its boundaries will convert to its opposite.” Take lying as an example. If a lie becomes so common that it is perpetuated to the point of total deviation, then that lie has transgressed its boundary and is now accepted as truth.

Children can sometimes embarrass us when their honesty is revealed in the wrong place and at the wrong time, thus exposing our own self-deceptions and weaknesses. After all, we are supposed to be their role models. Particularly as Muslims, we have assigned ourselves that task of being role models, and if our children are to grow up with a balanced sense of their religion, it is incumbent upon us to practice what we say we believe in.

Teach them from the very beginning

Every interaction we have with our children leaves an impression, especially during their early, formative years. It then becomes an essential part of their informal social and educational development. Michael Phelps, through his research with PET scan (positron emission tomography) at the University of California, Los Angeles, School of Medicine, concluded, “Final wiring of the brains is being determined between 2 and 10; you see how critical early education is. If a person learns a language at age 7 and another at 17, only the first is native. It’s hardwired. You can think in a language without having to translate” (Nadis).

As Muslims, we know the importance of language, with its many national and cultural characteristics, as well as the expressions, both physical and nonphysical, which go along with words. The young learn, from those around them, the convenience of lying.

They begin to see that lying is helpful in getting in and out of situations, and in deceiving those who have been deceivers themselves. In a parent-child relationship, this kind of deception fuels feelings of mistrust, which can cause confusion within the relationship.

I have seen 3- and 4-year-olds become extremely antagonistic, to the point of rebelliousness, when they are not convinced of their mother’s love for them because she has been too busy to give them a straight line. A pattern of disobedience sets in as they battle for the attention of the person, who instead of showing love for them continually deceives them with excuses and lies.

As these children enter school, their restlessness becomes unceasing and couples with a low opinion of authoritative figures, unless the mother or father can show them care. If not, then, as adults, these children fall into a pattern of giving their own children negative attention, with no respect for their inner needs.

Five-year-old Bobby heard his father say to his mother, “Honey, just answer the phone and tell Jim that I’m not at home.” And that was not the first lie. His father drove through red lights without bothering to stop, and in response to his son, who questioned him as to why he did it knowing that it was wrong, the father responded, “It’s all right — there are no police around”! When Bobby was 12, his mother told him to lie about his age, so they could get into the movies.

One day, Bobby’s parents received a letter from his school stating that their son was expelled from the school as he was caught cheating in his exams more than once. Devastated, the parents in disbelief said, “How could it be? We brought him up in a good home. Where did he ever learn to cheat? How could Bobby do this to us?” (John, 74). Almighty Allah says,

(And should the truth follow their low desires, surely the heavens and the earth and all those who are therein would have perished. Nay! We have brought to them their reminder, but from their reminder they turn aside.) (Al-Mu’minun 23:71)

What do experts and psychologists say? 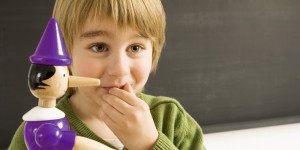 example, are much more likely to make it a way of life. It’s no wonder that today’s workplace is full of adults who lie about everything from past job experiences to fellow employees.”

Ninety-three percent of 40,000 Americans surveyed admitted to lying “regularly and habitually in the workplace,” according to a Fast Company report. Chair of Psychology at the University of Central Florida Robert Dipboye gave five reasons as to why people lie (Thomas-Massey, 1):

1. Need 2. Opportunity 3. Feelings of dissatisfaction or mistreatment  4. Feelings of inequity 5. “Everyone else does it!”

How can there be a free society of people who habitually lie and cheat? It creates an atmosphere of mistrust and unreliability, where nothing really seems to matter beyond the self. It eats away at the most important institution — the family, and contributes to a sense of insecurity at home, school, and work.

Within the family, the child grows up in an atmosphere from which he or she may not be able to have a successful future. But if the child does gain success, whose terms will it be on and at what price?  “Truth in its effectiveness, as well as in its conveyance to the destination, is not inconsistent, nor does it fail to bring about its result.

If a believer overcomes an enemy of the truth in this life, then he is the victor and also gets a good reward for it in the hereafter. If, on the other hand, he is defeated by the enemy of the truth, and the enemy compels him to adopt things that are disliked by Allah, then it is his duty to act accordingly and save his life” (At-Tabataba’i, 272).

As adults, we must watch ourselves, for whatever we say to a child will be weighed against what we do. They need time to discover their own thoughts and feelings, as well as likes and dislikes. But, equally, they need our love through our actions and the quality of the time we spend with them.

The Prophet’s Companion `Ali ibn Abi Talib said, “Keep away from lying, for surely it keeps belief away. The one who is truthful is within sight of safety and honor, and the one who tells lies is on the brink of a precipice and degradation” (Haeri, 97).

If a child has already developed a pattern of lying, make it known to him or her that you know. Try to get to the bottom of why they felt the need to lie. It might be an attempt to get your, or somebody else’s, attention. Are you always too busy?

A clinical psychologist and childcare expert stated, “Parents who create a supportive atmosphere by listening sensitively, asking clarifying questions, presenting a higher level of reasoning, and using praise and humor have children who gained the most in moral understanding. In contrast, parents who lectured, used threat, or made sarcastic remarks have children who are disobedient and have low moral standards. So, it is important to set a good standard” (John, 74).