Each woman should be able to choose for herself who would best support her during the highly emotional and uncomfortable time of labor and delivery.
aaa

“It’s bad for him to see you like that,” was the vague reasoning that potential care providers explained why my husband would be banned from the birth of our third child if I hired them.

When I responded that he had already seen my first two labors (and obviously he had been able to continue to reproduce, if that’s what they meant) I was shrugged off, the practitioners’ policies remained firm.

Ultimately my husband and I prematurely left our temporary residence in Morocco and returned to the US to have another homebirth. Later I would learn that barring men from attending their wives’ labor is a common practice in many Muslim-majority countries, though for varying reasons and none being evidenced-based.

Will it traumatize him?

The main excuse presented for why men shouldn’t view their wife giving birth is that it will be traumatic for him to witness. It is commonly believed that it could be detrimental to the couple’s sex life for a man to see his wife like that, meaning her perineum being stretched and some blood coming from her vagina.

Some doctors are less concerned about the couple’s future sex life and more worried about the gore factor citing the extremely rare circumstances of husbands fainting in delivery rooms. The “stronger” sex, who is supposed to protect us all on the battlefield should need be, is seen as too fragile to witness the very thing that brings each of us into the world.

Hijab may be compromised

Hayaa (shyness/bashfulness/modesty) is another excuse that is used to ban men from delivery rooms. During my fifth pregnancy my husband and I attempted to interview a midwife in Morocco who ran her own clinic. This time my husband wasn’t just barred from the labor room, but he was not allowed to enter any part of the building beyond the initial waiting room.

The midwife did not want to wear hijab during her work hours and therefore no men were permitted to attend prenatal appointments, the actual labor or even to visit their wives and newborns in the clinic.

Midwife, doula and childbirth educator, Aisha Al-Hajjar, has heard the hijab excuse used in many private and government hospitals in Saudi Arabia and Egypt. The policy is said to be in place for female employees, yet there are many male orderly staff throughout the facilities interacting with both female employees and patients. The comfort of the staff is put before that of women likely facing the most vulnerable and painful moments of their lives.

All support is banned

While plenty of people can argue that a birthing woman is best cared for in the traditional way by only other women, frequently these facilities that ban husbands from attending delivery actually ban anyone – male or female – from attending a woman’s birth as her support person. Throughout Muslim countries, such as Oman, Pakistan, Saudi Arabia, Egypt, Morocco and Yemen women are not allowed to bring any family member, friend or even a hired doula to attend their deliveries.

Al-Hajjar says that in Saudi Arabia some hospitals isolate laboring women to such an extreme that they “even take the mobile phone away so she has no contact with the outside world during her labor and birth and immediate postpartum.”

Hospitals can refuse to allow support persons for a variety of reasons, such as concern that they will interfere with procedures or that their insurance doesn’t allow it. Many care providers simply do not like being questioned about what procedures they are performing and why, (including from the laboring woman), and therefore ban attendees who may interfere in even an informed and supportive way, such as doulas. 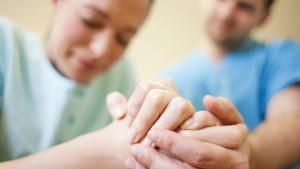 From within medical communities it is not “backwards thinking” cultural beliefs that are the main reasons preventing husbands from attending births, rather it is doctors seeking full control over their patients’ bodies. Studies have present mixed messages about whether or not men should attend labor, but read carefully it is clear when they should.

Why do husbands attend birth?

Men began attending hospital births in the US and Europe in the 1960’s and 1970’s. Birthing had predominately moved out of the home, and the family unit had become nuclear, so as women lost the regular support of other women in and around the home they turned to their husbands for labor support.

Similarly, as contemporary Muslim families migrate from their homelands where they likely had more family support, women often find their husbands as their sole support during labor and delivery.

Misha Dobiasova’s husband was glad to have the opportunity to attend her labor in the UK though this practice is still unheard of among his family in Pakistan. My husband, who is from Morocco, says that he attended the birth of our first child as he found himself doing many new-to-him things as an immigrant.

After seeing how it is the norm for fathers to attend births in the US, my husband was eager to “try it” as well. He has since attended all seven of our children’s births, including one C-section.

When a man should not be present during labor

In 2009 Michel Odent, a French obstetrician and ardent homebirth advocate, correlated increasing C-sections with fathers’ presence in the labor room. Odent believed that fathers could increase the laboring mothers’ stress which would cause them to labor poorly.

A new study offers some support to Odent’s claim, figuring in the women’s general reliance on her partner for emotional support: if she is generally not emotionally intimate with her partner, then she likely won’t find comfort in his presence during her labor.

There is another reason that some women do not want their husbands to attend their labors. When Karimah Kareemah was due to give birth in Mauritania she preferred that her husband not attend her labor, “It was ok for me because I was more concerned with having a completely natural birth without any invasive interventions and he would have agreed with medical staff on anything they recommended.”

Kareemah, a Registered Nurse with six years of emergency room experience, choose two female friends to act as her support and had a very positive birth.

When should a husband attend labor?

Whether a man should attend his wife’s labor should not be an arbitrarily institutionalized policy or cultural norm. Each woman should be able to choose for herself who would best support her during the highly emotional and uncomfortable time of labor and delivery.