Know that an unhappy marriage and divorce are tests of this world, and how you pass those tests will determine your rank in the Hereafter.
aaa

Cognitively recognizing the validity of a woman seeking divorce – whether due to incompatibility or otherwise – is one thing, but the emotional reality is a painful struggle on its own.

It can take months, if not years, to reach the point where one finally decides to seek a divorce, but in the meantime – as well as during and after the process – the challenges can feel overwhelming. As a woman who was in a toxic marriage and sought khul’, here are a few pieces of advice and points of reflection from my own experience.

Know that an unhappy marriage and divorce are tests of this world, and how you pass those tests will determine your rank in the Hereafter. Will you lose hope in the Source of Divine Mercy, or will you strive to grow closer to Him?
Make an effort to pray even two rak’aat of qiyaam al-layl; try to fast on Sunnah days, or give extra in sadaqah. Moisten your tongue with the remembrance of Allah and sending salawaat (prayers) upon His Messenger.

Every good deed you do to seek closeness to Allah will Insha’Allah be a means of increasing your reward and easing your difficulty.

{Unquestionably, by the remembrance of Allah hearts are assured.} (Qur’an 13:28)

Muslims have an unfortunate tendency to deny the existence of abusive relationships in our community. There are various factors behind this; some are due to cultural attitudes in which physical violence is considered ‘normal’, and others are due to pseudo-religious mentalities that don’t consider verbal or emotional abuse to ‘count’ as abuse.

It is necessary for us to learn about different types of abuse – physical and emotional – in order for us to be aware of unhealthy behavioral patterns that may emerge in our marriages, whether it’s coming from us or from our spouses.

It’s important to note that women as well as men can be, and are, abusive. We should never fool ourselves into thinking that we are the ones who are always correct, and that it is only ever the other party at fault – sometimes, it’s all too easy to fall into error and, in fact, be the oppressor ourselves. As always, we must also remember that we will be held accountable for our words and actions on the Day of Judgment.

“The Muslim is one from whose tongue and hand other Muslims are safe.” (Bukhari)

{That Day shall We set a seal on their mouths. But their hands will speak to us, and their feet bear witness, to all that they did.} (Qur’an 36:65)

No one can decide for you whether you should get a divorce or not. It is something solely up to you to choose for yourself. You alone know what to expect from your future, what your options are, and what you plan on doing with your life.

You also need to be aware of how the divorce will affect your children, not just emotionally, but in terms of living arrangements and so on. At the end of the day, it is you who will bear the consequences of either staying or leaving.

While others can give you advice or provide support, you are the one who must make the ultimate decision. Do your research – both Islamic and legal, as well as what to expect emotionally – and ultimately pray Istikhaarah before making your final choice.

Learn the meanings of the du’a of Istikhaarah as well, and you will learn how truly beautiful it is and what it means to place your full trust in Allah alone.

“O Allaah, I seek Your guidance by virtue of Your knowledge, and I seek ability by virtue of Your power, and I ask You of Your great bounty. You have power, I have none. And You know, I know not. You are the Knower of hidden things.

It doesn’t matter if you’re the one initiating the divorce or not – it’s going to hurt. Except in certain cases such as extreme abuse or forced marriages, I would say that there is almost always going to be a huge sense of loss.

Let’s face it – being married to someone, whether for four years or fourteen years, is a unique experience that brings you close to that individual and bonds you together in a way like no other. You have gone through both good and bad, witnessed both small achievements and life-changing goals, you have slept next to them almost every night for years. It is going to hurt.

Being flawed doesn’t make you evil

It can be very tempting to view your partner as a villain who is out to destroy your life, but the truth is that they are simply flawed human beings – just like we are. They are usually going through a great deal of emotional turbulence themselves, and feeling just as alone and hurt.

Sometimes they have their own baggage and are struggling with their own demons, and we should be mindful not to conflate their flaws and weaknesses with their entire worth as a person. 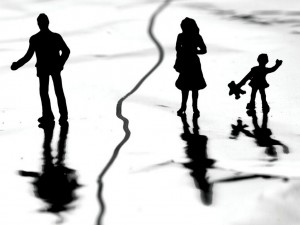 It doesn’t matter if you’re the one initiating the divorce or not – it’s going to hurt.

Whether you have already chosen to divorce or not, it is easy to let your frustration and your pain get the better of you.

However, remember that the believer’s character is revealed during times of difficulty – how you conduct yourself, how you control your temper, and how you speak will all reflect the true level of akhlaaq (good manners).
After years of being together, of a relationship that was unique despite its turbulence, it’s impossible to just throw out the feelings of tenderness and compassion and to feel apathetic.

That’s not to say that you won’t make mistakes and stumble, or that you won’t continue to feel extreme hurt and emotional turmoil, but simply keep in mind that you should try to be the better person for the sake of Allah. Even and especially when the other individual is trying their best to get under your skin, know that you will be held accountable for your behavior, not theirs.

You will make mistakes

There will be times when you feel like your entire world is crumbling around you. You will sob yourself to sleep; you will wake up feeling absolute rage towards the other person; you will feel resentment towards the years of your life that you feel were ‘wasted’; you may find yourself saying cruel or hurtful things.

Your emaan (faith) may become so weak that even praying your fara’id (pl. of faridah; Arabic for obligatory acts of worship) on time will feel like an impossible task. And it’s okay, because we are all human and bound to slip up.

The important thing is to recognize that making mistakes is a normal part of human life, and that we simply need to turn back to Allah seeking His Forgiveness and Mercy, and that He will always be there for us.

Remember the good, not just the bad

There is an infamous hadith that mentions women who become so upset that they forget the good that has happened to them. Having been in a situation where it was tempting – and easy – to overlook the bright spots in favor of brooding on the dark times, I can say that gratefulness to Allah goes a long way in healing painful hurts. 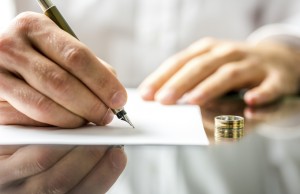 Even in deeply unhappy situations, there can still be moments of small happinesses, little joys and pleasant memories.

Even in deeply unhappy situations, there can still be moments of small happinesses, little joys and pleasant memories; things to think back to and smile about (even if that smile is a little sad). Don’t let the bitterness completely overcome the traces of sweetness left.

Many marriages end slowly and agonizingly, and it can be more painful for one side than the other.

Yet although you can be happy to finally be divorced, it doesn’t mean that you will automatically stop caring for the other individual entirely. After years of being together, of a relationship that was unique despite its turbulence, it’s impossible to just throw out the feelings of tenderness and compassion and to feel apathetic.

Even though divorce renders you non-Mahram to each other, it doesn’t mean that you shouldn’t want the other party to find happiness, or that you won’t worry about their future. In fact, it is the mark of a believer to want for their fellow Muslim what they want for themselves. The heart doesn’t have an on/off switch, so don’t expect it to.

Sometimes, even if we really want to have the kind of amicable divorce where everyone conducts themselves with politeness and respect and maybe even friendly cooperation… it’s not so easy for the other party to share that vision and sometimes, it’s just impossible.

Whether you’re the one who initiated the divorce or the one who received the news of it, the pain and inner torment of it all can be too much to shelve away neatly and go on as though none of it matters. Some of us are able to acknowledge our emotions and move on, and some of us aren’t.

It can get nasty, it can get even more painful, but at the end of the day, we have to realize that as much as it would be much more convenient for things to go smoothly between you and your former spouse… it just might never reach the point of being an amicable divorce.

Once again, this is a time to turn to Allah and make du’a for the other person (even if we really, really don’t like them right now) that He ease their pain and yours.

Divorce can make you a better person

The struggles – and the good times – that you shared with your ex-spouse all took place for a reason. Allah tests those whom He loves, and divorce is just one of those trials and tribulations in life that we can emerge from as stronger Muslims and better people.

Not only are we given the opportunity to turn to Allah with a broken heart and find healing in the Words of al-Shaafi, the Healer, but we are now equipped with life skills that will help us recognize our own faults and shortcomings.

We are also, Insha’Allah, better able to understand and empathize with the ex-spouse, which is an excellent reminder of the importance of humbleness and forgiveness (and how hard they both are to truly embody).

Divorce is undoubtedly a difficult, unpleasant life experience and there’s no way to really put a positive spin on it… but there are ways to recognize the blessings that accompany every fitnah in life and to benefit from them, knowing them to be a part of the journey to Jannah, Insha’Allah.

{Or do you think that you will enter Paradise while such [trial] has not yet come to you as came to those who passed on before you?} (Qur’an 2:214)