Homeschooling provides the platform for children to develop at their own pace and pursue their interests without prejudice or judgment.
aaa

The call of the Adhan (call for prayers), plentiful halal foods, people who know about Allah (SWT) similar to how you do, easier access to Islamic or Arabic resources for the entire family, and of course sending your kids to schools with Muslim teachers and peers are all among the perks of repatriating or making hijrah (migration) to the Muslim lands. Scratch out that list bit for me and the growing handful of families who choose to homeschool even over here.

For many Muslim families who homeschool in the West, they expect to discontinue doing so once they move abroad as if all the reasons they chose to homeschool in the first place will be left behind. It shouldn’t come as much of a surprise that all the reasons are present in the ‘East’ too, where the Western model of education is mostly replicated and this is exactly why so many expats and locals are continuing or starting to homeschool.

Growing Pains?
When freshly relocated expats complain about the conditions they find in the schools locally available to them, whether the curriculum, the general ethics or particulars of the staff, often more experienced expats will appease these complaints with something like, “You’ll find a fit. You just have to keep looking.” By ‘fit’ I think they might mean another sort of compromise, such as with more drive time or maybe that’s just code for ‘You’ll get used to it’ as so many seemed to do.

For former homeschoolers like Charlene Gray, who homeschooled in Australia but initially enrolled her daughter in schools in Morocco, she knew that there was no reason to compromise her daughter’s education when she found the school environments to be lacking in demonstrating Islamic principles as well as below her own standards of academics. Now Charlene’s daughter is back to flourishing as we know homeschoolers usually do.

Corporal Punishment, We Won’t Go There
It falls upon the responsibility of parents to be the primary educators of their children, not the state’s or the institution.

Another common thread of discussion I see among expats is about their kids being abused or bullied in school. This is something nearly every expat family I know of in my region has experienced. They have absolutely experienced it as far as other children bullying, throwing rocks at and fighting with each other, which I agree is a part of childhood that is unavoidable. 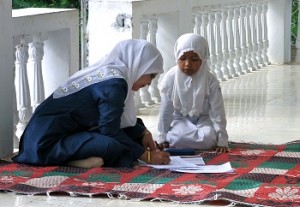 I regularly deal with these kinds of problems outside of school hours, so would hate to think that my children were experiencing more while in school, but they would, and even at the hands of the adults.

Just as discrimination is illegal in the states but still regularly happens, corporal punishment within schools is illegal in the region I live in but happens very regularly. Many parents deal with this by confronting their children’s teachers, often more than once and sometimes resulting in physical altercations. One such fistfight with her child’s (male!) principal is what led an expat friend of mine to return to homeschooling even though she obviously had thought she could quit once she made hijrah (migration).

This may sound like a worst of scenario, but unfortunately it is frequent when the parents choose to confront their children’s educators. Even if you step in and your child is no longer being abused by the teacher, they are still sitting among other students who are being emotionally and/or physically abused. While I want for your child what I want for my own, currently the best I can do with these circumstances is to home-educate and encourage the same for you.

Daily incidents of bullying was just one paradigm shift motivator for unschooler and prolific writer ,Sadaf Farooqi who admits on her blog that sometimes her child (when younger) was even on the offensive side of bullying. While many non-homeschoolers site concerns about lack of socialization as a reason not to homeschool, Sadaf, saw that her schooled child’s socialization was being adversely affected as her pre-primary daughter “had more problems than improvement in her social ‘interactions’ (fights and conflicts) with peers” as socialization in institutionalized school settings has multiple problems.

As Sadaf has explained in the comments of her blog, “I personally think it’s debatable whether school improves social interaction. I think at the pre-primary and primary level, school actually curbs confidence, because such small kids rarely get to ‘socialize’ with each other freely only before first class, during break and in the short time after school before they are picked up. The rest of the time, any endeavor to ‘socialize’ innocently is strictly curbed by supervising teachers, and if continued, even results in that child being labeled as ‘naughty’ and ‘disobedient’.”

Sadaf discovered the concept of homeschooling through several teachers who, like many pioneers of the homeschooling movement in the US, chose to homeschool instead of forcing their children to sit through years of substandard and even abusive ‘educational’ environments or they became ardent advocates for others to homeschool. Sadaf has become a semi-reluctant key figure in the steadily growing homeschool community in her native Pakistan, be sure to check out her blog for lots of good insight both on general unschooling and specifically homeschooling in Pakistan.

Maria perfectly summed up many of my own reasons for home-educating, even in the Lands of the Muslims, “After 6 years of homeschooling, I’ve had time to put in much thought as to why I have chosen it, and I believe, first and foremost, it’s because I believe that it falls upon the responsibility of parents to be the primary educators of their children, not the state’s or the institution. 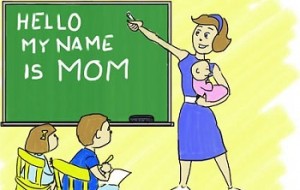 I think parents have lost a lot of their parenting skills, due to pawning off their children to schools at too young an age, for too long a period of their waking time, that both parents and children have lost the true value of education, which encompasses so much more than textbook – classroom learning.

Our religion puts so much honor in parents – children have to be THE BEST to their parents up until old age, but I would like to question many adults (including myself), have we done enough to deserve this type of honor and respect from our own offspring? A “parent” is not just a noun, it’s also a verb, and adults need to honor this by being cohesively involved and understanding of their children’s growth and development. Secondly, another belief – Islam champions the great diversity of the ummah.

In fact, the strength of the ummah lies in the diverse heritage of its people. While other religions struggle with supremacy of certain races and caste systems, Islam has zero tolerance for discrimination against race, nor against genders (men and women are spiritually equal), nor age, nor upbringing. The same should be taught for the diversity of talents, interests, specializations (all within Shari’ah of course).

Homeschooling provides the platform for children to develop at their own pace and pursue their interests without prejudice or judgment. When children are encouraged to do things that they love and are given the time and space to explore, they flourish a lot more as compared to learning under stress and timelines.”

Ultimately my Best Reason to Homeschool While Living in the lands of the Muslims is this: I like homeschooling. I enjoy encouraging my children’s diverse interests and talents, I believe in my role to be their primary educator (along with my husband) and know that there is plenty of support available to us to do it, so I do.

Yes of course homeschooling is exhausting and I have plenty of days in which I fantasize about the relief I may feel if I just put my kids in school. Ultimately this is one area of my life where I can delay gratification, Insha’ Allah my relief will come later, but there is already plenty of joy and gratitude right now.