Mandela was astute and humble, a fighter and a gentle soul, educated but held equal respect for those that lacked formal education.
aaa

Each time Nelson Mandela was admitted to hospital, the nation held its breath. “Would these be his final moments?” we would anxiously ponder. But then, he would be released and he would go back home, and we would collectively exhale.

The rolling green hills of Qunu, Mandela’s village, must surely be mourning the passing of their great son. A son, who fought to reclaim the dignity appropriated from his own father, Mandela was actually born in the tiny village of Mvezo, where his father was the chief and a wealthy man who owned land and cattle. But he disobeyed orders and the magistrate stripped him of his chieftaincy and all that he owned was taken from him. That’s when they moved to Qunu, but when Mandela was nine years old, his father died from illness, a man impoverished by the colonialists.

I imagine Mandela’s father would have been immensely proud of his son’s dedication and complete commitment to the struggle. Loosely translated Mandela’s name ‘Rolihlahla’ means ‘troublemaker’, though literally it means ‘pulling the branch of a tree.’

Throughout South Africa, he was affectionately known by his clan name, Madiba. He grew up hearing tales of Xhosa resistance to the seizure of their lands by white settlers. Mandela himself never credited himself for the victory over apartheid, but gave due credit to all the known and unknown stalwarts who sacrificed immensely to give us our freedom.

Leading the Country from Apartheid to Democracy

South Africa’s transition from apartheid to democracy could have easily descended into civil war, but Mandela’s first speech after his release assuaged all fears. His determination to normalize South African society and to work towards a united country was his priority.

He made this clear in his first speech in 1990 when he said,

“Negotiations on the dismantling of apartheid will have to address the over whelming demand of our people for a democratic, non-racial and unitary South Africa… Our struggle has reached a decisive moment. We call on our people to seize this moment so that the process towards democracy is rapid and uninterrupted. We have waited too long for our freedom. We can no longer wait… The need to unite the people of our country is as important a task now as it always has been…”

A remarkably wise and intelligent man, Mandela recognized the unifying force of sports. It took many by surprise the immense support he gave to the South African rugby team when the country hosted its first World Cup Rugby tournament in 1995. Until then rugby was a white sport, played in a white-owned stadium. He had held private meetings with the captain Francois Pienaar, encouraging him and guaranteeing his full support for the team. 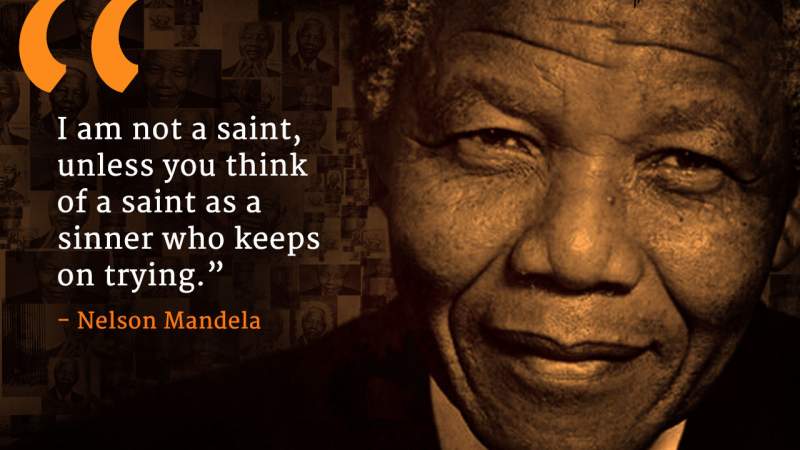 This unifying mastery on Mandela’s part changed the trajectory of the social landscape of South Africa. It was a feat that can never be overestimated. It was one of South Africa’s most glorious moments when they were crowned world champions, with Mandela at the stadium donning the rugby jersey.

It was a moment when practically every South African was bursting with pride, as rugby was transformed from a “white man’s sport” to simply a South African sport. This unifying factor still resonates today where sportsmen are not cheered for the color of their skin, but for their remarkable skill.

Those who knew Mandela and even those who encountered him briefly speak of how he would sincerely ask about a person’s well-being, their family, and their children. To the average South African, Mandela represented a multitude of attributes. He was astute and humble, a fighter and a gentle soul, educated but held equal respect for those that lacked formal education. He spoke to the poor in the equal manner he would address a king. He was tenacious as a politician but succumbed to the laughter of children.

In a fitting tribute to him, his close friend of 67 years and fellow stalwart, Ahmed Kathrada, wrote, “Your abundant reserves of love, simplicity, honesty, service, humility, care, courage, foresight, patience, tolerance, equality and justice continually served as a source of enormous strength to me and so many millions of people around the world. Your inevitable death can never take from our country and the world the values and ideals which you symbolize and shared with us. “

South Africans are never going to forget Nelson Mandela. For the fight he fought we stand tall with pride, knowing we will never again have to endure the indignity of being classed inferior. South Africa is faced with many challenges today, but Mandela and his compatriots laid a solid foundation and paved the way for a successful and unified South Africa. It is now up to us to have the will and vigilance to continue his ideals.

Mandela put it aptly when he said, “I have walked that long road to freedom. I have tried not to falter; I have made missteps along the way. But I have discovered the secret that after climbing a great hill, one only finds that there are many more hills to climb. I have taken a moment here to rest, to steal a view of the glorious vista that surrounds me, to look back on the distance I have come. But I can only rest for a moment, for with freedom comes responsibilities, and I dare not linger, for my long walk is not ended.”

It will take a long time for us as a nation, and for those around the world who loved him, to heal.