For some people, selfies are a way to deeper connect with the Hajj experience.
aaa

Selfies are another way by which we have the opportunity to know one another.

One of my favorite things about this time of year (the Hajj season), is the vintage photographs that circulated among Hajjis doing their rites. Amongst the best are the unforgettable ones of the year Makkah was flooded and Hajjis were swimming and wading around the Kaaba.

I’ve came across an especially nice collection of Hajj portraits from 1880 featuring Hajjis from Baghdad to Zanzibar. Even though I grew up in a fairly culturally diverse environment, it is still fascinating to behold the immense diversity that Hajj attracts – and we can just imagine how impressive the experience is for those who come from more monolithic backgrounds.

For visual thinkers, like myself, viewing images of the Hajj can intensify our hope and desire to someday make it there ourselves, insha Allah. Of course these images of diversity are of men only, as usually there is a lack in these collections of images about women. Not recently though, as Hajjis have turned the cameras on themselves, giving us an even greater peek into the not-at-all-private journey of a lifetime.

While I understand some of the concerns that selfies are essentially boasting about one’s accomplishment to make Hajj, and can even detract one from the purpose of hajj, that’s not all that is going on with this selfie phenomenon, and people may be so busy shaming the Hajjis that they are missing the greater picture.

First of all, we know some men are more concerned with being seen by others than they are with having true taqwa:

“Verily, the hypocrites seek to deceive Allah, but it is He Who deceives them. And when they stand up for As-Salat (the prayer), they stand with laziness and to be seen of men, and they do not remember Allah but little.” (4:142)

So there will always be these types of people, and though warnings directed to them may be quite understood, there are other issues with the Hajj-selfie shaming, which are just unfair.

This idea that Hajjis are to be “present” at all times during the Hajj is unrealistic. 24 hours/6-21 days of undivided focus is beyond human capacity.

Folks aren’t cutting it up and doing haram on Hajj (if you are in the boat that digital imagery is not haram), they are just commemorating their experience and potentially even making dawah to those of us left behind. 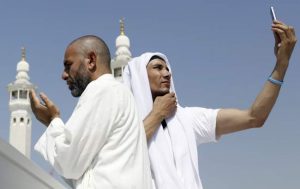 And while I empathize with the problems some people are having maintaining their khushoo while having selfies clicked all around them, I also hope these folks never have to pray on a battlefield or under fear of bombs overhead, like our siblings in Palestine, Iraq and Syria do.

As an artist, writer and photographer, I also understand the inherent desire to record Allah’s magnificence, which surrounds us. Being created in the image of the Creator, for many, means we have the inborn desire to create. Even though we, creative types, know that nothing we create will ever come close to the splendor of the Creator, the drive is real and the creating (photographing, writing, etc) helps us to better make sense of and appreciate this world.

For some people, selfies are a way to deeper connect with the Hajj experience. And while there are concerns that people will be using these images for bragging (“Look at me on hajj!) there is much more likelihood that these images will be used in a much more personal way to educate and encourage family members about hajj.

A couple of years ago, I sat with my children and a family member looking over her memorabilia from the Hajj: perfume, simple beads and a collection of stock images. We also looked over a few of the picture books about Hajj, which were available and eventually looked up more images online as the kids wanted to see more.

This was a great and personal way to teach my kids about Hajj, but one thing that struck me was how visually and digitally in tune their generation is. They know that there is more information readily available on most subjects, and they want it to seek it out.

Not only will more personal images of their family members help to flesh out the concept of Hajj, but seeing a truly diverse body of images, including women and children, will cement for them the idea that Hajj really is an experience for everyone – not just old men in black and white photos.

Beyond al-Haram, I would encourage Muslims to rethink following (down a worm hole) non-Islamic based pop psychology about selfies. There is a lot of negativity directed to the practice of taking selfies, especially at women, but for Muslims – who are marginalized and ridiculously over-stereotyped across all mainstream media – selfies can be an empowering tool whereby we present ourselves to each other as well as the rest of the world. Selfies are another way by which we have the opportunity to know one another.