Making decorations with children can have the added bonus of building up the excitement and anticipation for the month.
aaa

While Muslims in the US enthusiastically pull out their stored Rubbermaid tubs marked “Ramadan/Eid,” packed with strings of paper lanterns, electric lights and glass ornaments bought, others find this “new” tradition to be a questionable innovation or another capitalist trapping.

It may seem that converted Muslims have simply transferred their old traditions and newly immigrated Muslims have copied their neighbors’ practices of decorating for the holidays, but Muslims all over the world have long had Ramadan preparation practices which include decorating.

Streets in Egypt, Palestine and Jerusalem are famously and beautifully hung with fanous (metal lanterns), as are the balconies and interiors of many local homes – the families’ collections growing as each child gets their own fanous.

Public and private displays of decorations appear in other countries too, such as the ketupat (diamond shaped weaving of palm or paper) in Malaysia, Indonesia and Singapore.

Across the Muslim world, the first step to decorating begins with a thorough house cleaning – a decluttered house is a reflection of a decluttered, Ramadan-ready mind.

In Morocco and Jordan, cleaning rolls over into ‘decorating’ in more sustainable ways. In addition to pulling out their best wares for nightly iftars and anticipated guests, a little interior decorating is often in order.

Jehan Abukharmah, who is Palestinian and raised in Jordan, remembers an integral part of preparing for Ramadans in her childhood was minor home improvements, such as painting rooms and buying new furnishings. Here in Morocco many families mark the coming month by changing out the tlamet (couch and cushion coverings) for fancier ones. The flurry of touch-ups creates a special, festive feeling in homes. 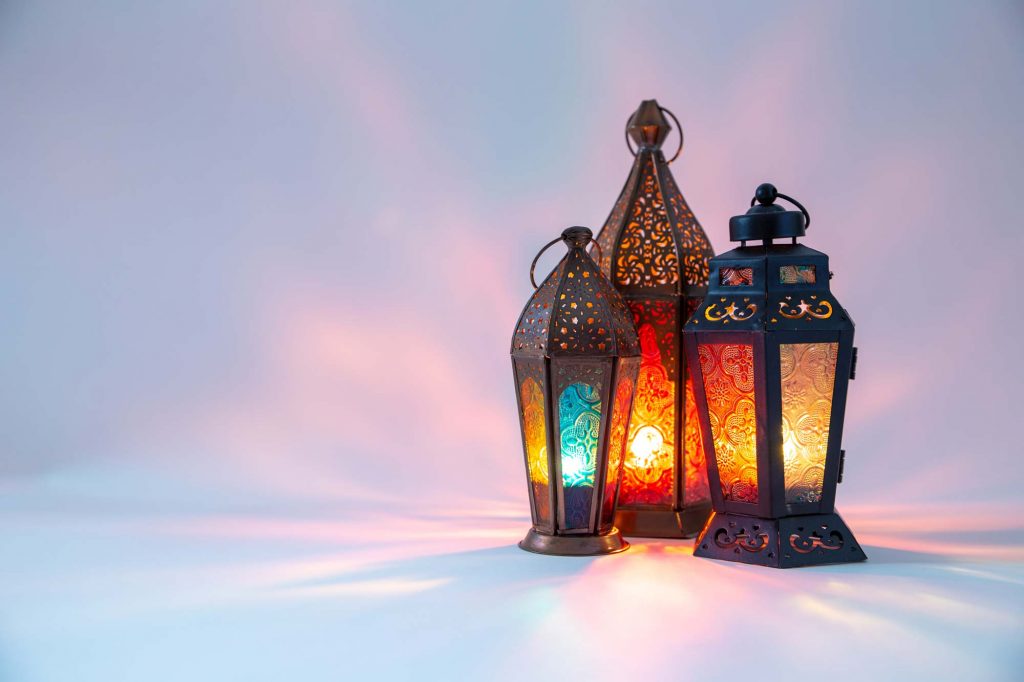 Muslims in the west often carry on the tradition of deep cleaning their homes, and some have infused other elements of holiday decorating, which generally mirror the flounce so visually present for other common western holidays.

Hafsah Zamir Khan grew up among few Muslims in a small town in Surrey in the United Kingdom, “Living in a non-Muslim community there was not much available, so my mother would buy Christmas decorations on sale after the New Year, usually foil hanging ornaments and garlands and sometimes even fairy lights. Helping our mother decorate the house a few days before Ramadan made us excited about the holy month and we loved the surprise on people’s faces when they visited and saw all the decorations.”

Hafsah is thankful for her mother’s efforts to make the holiday extra special for her and her siblings “and not feel like non-Muslims had all the fun with Christmas. I think that’s very important for Muslim children in the West – to not feel left out at Christmas time, but feel that they have their own celebrations.”

Insha Allah for her own children, Hafsah hopes to take the tradition further by bringing in “more Islamic and traditional decorations to help my children learn and understand why we fast and to instill love in their hearts.”

Fortunately for Hafsah there is a rapidly growing cottage industry of Ramadan and Eid decorations now available to choose from, as well as innumerable do-it-yourself ideas catalogued on blogs, Pinterest and elsewhere online. Many of these decorations feature elements specific to Muslim holidays, such as using imagery of moons, dates and the Kkabbah as well as Islamic reminders and sayings.

The majority of Muslims who decorate for Ramadan likely do so for their children. Decorations give children the tangible markers of a holiday, which can be elusive for young minds to fully grasp. It may take several nights of iftars and taraweeh prayers for a child to remember they are in the midst of a special and holy month. Something as simple as a hanging garland or table centerpiece gives children a constant reminder of this special time that is bringing upheavals to their regular schedule and habits.

For the youngest of children, sparkly and colorful decorations may simply be a joy to their senses. For children who are fasting – either by not eating during the day or through other acts, such as not watching television or doing more acts of ibadah and charity – the decorations can serve as a constant reminder to keep their fasting up.

While it’s easy to dismiss decorating for Ramadan as an abhorrent innovation or imitating non-Muslims, visual reminders of the blessed month can have their place in Ramadan with the right intentions. Just as waste at extravagant iftars goes against the meaning of Ramadan, decorations should also be done in a sustainable and thoughtful manner.

Making decorations with children can have the added bonus of building up the excitement and anticipation for the month. Of course, when buying beautiful, quality decorations that can be used year after year, always try to buy Muslim made.