Before moving to Morocco, I assumed that I would relocate there, creating my long dreamed of suburban family home, but with Arabic subtitles.
aaa

“Allah also gave me an opportunity to get away from it all. I don’t mean the five-star sort of getting away; rather it was a chance to try this simple living thing that so many people pine for, though I had never.”

Recently I read an interview with Ibrahim Abdul-Matin, the author of ‘Green Deen,’ in which he laments about how and why so many Muslims are out of touch with the nature and therefore, apathetic to environmental issues.

Seated 1200 feet above sea level in my mud house located in a mostly self-sustaining farming community in the High Atlas Mountains, I was geographically so far away from Abdul-Matin in Brooklyn and living a much different lifestyle, still I embarrassedly felt that he spoke exactly about me.

Before moving to Morocco, I assumed that I would relocate there, creating my long dreamed of suburban family home, but with Arabic (or French) subtitles. I don’t knock myself (or anyone else) for having such dreams.

I wanted a big chunk of Allah’s glorious bounty: my own semi-private yard, a comfortable car and enticingly displayed foods for sale within a short driving distance.

What He gave me was a lovely but teeny old French-style apartment with rusty pipes, cracking lead paint, and a mineral-depleted yard on a busy street in a trash-filled city under a heavily polluted sky that has causes high rates of respiratory-related ailments.

Allah also gave me an opportunity to get away from it all. I don’t mean the five-star sort of getting away; rather it was a chance to try this simple living thing that so many people pine for, though I had never.

My husband and I hotly deliberated the opportunity to rent a ‘ram-packed earth’ house with internet access and electricity, but two hours down a windy road from the nearest (tiny) city.

Ultimately the argument that we should “do it for the children” won.

A Healthy Lifestyle with a Different Rush Hour

Several days into our stay here in the valley, I became familiar with a new kind of rush hour.

Just before Mahgrib the road outside our house would become crowded and noisy, filled with women, children and their animals- sheep, cows, goats and donkeys- returning home from grazing and working in their fields.

I knew goats and sheep wandered about with those deeply contemplative shepherds, but I had always wondered about that adage “When the cows coming home.” Didn’t they stay in a coral next to the barn, like horses? Like a city girl out of cement, I was relearning Allah’s bounty with a different stride.

While I had preoccupied myself with the heady stuff of halal/zabiha/organic wars online and in the Islamic community center buffet lines- I never knew how much hands-on work it takes to care for these delicious creatures Allah gifted to us.

A few months further into our trip, my teen son and I exchanged glances while walking past homes with enormous knee deep piles of animal manure casually piled next to them.

“Why?” our raised brows asked each other. It was inconceivable to us why anyone would want to live with that. A week later I laughed heartily at myself when I noticed men with manure laden donkeys fertilizing their fields. I’m not completely ignorant. I knew that manure is used as fertilizer, but I also thought there must be some kind of (no doubt tidy) process to make manure into the more sterile sounding stuff that is fertilizer.

I truly am one of those Muslims Abdul-Matin believes “are very disconnected from the natural world and the processes that create stuff.”

Like many Muslims, I was familiar with the biography of the Prophet (peace and blessings be upon him). I was likely sipping my favorite fair-trade coffee and reclining on my chemical treated stain-resistant sofa while reading the following passage from the ‘Sealed Nectar,’

“It was the general custom of the Arabs living in towns to send their children away to Bedouin wet nurses so that they might grow up in the free and healthy surroundings of the desert whereby they would develop a robust frame and acquire the pure speech and manners of the Bedouins, who were noted both for chastity of their language and for being free from those vices which usually develop in sedentary societies.”

How idealized, yet unattainable this sounded to me and people I have since known to reference this tradition. You know, people do have to work at jobs and children have to go to school. Maybe on holidays or for retirement, but never did I imagine I could provide my children with a similarly healthy lifestyle.

Right now, looking out the window to where my front yard would be if I were in a tract home, I see my neighbor baking hers and our daily bread in a traditional earthen oven. A few children are casually lingering around, not at all shy about the fact that they are waiting to beg for a piece of one her truly fresh and preservative-free loaves. She always happily gives them each a nearly too-hot-to-handle chunk.

While the bread bakes, taunting us all with a mouth-watering aroma as well as the sweetness of the flora fueling the oven, the children (and she and I) are surrounded by some of the most unspoiled and beautiful countryside I have ever seen in person. Not a bill board, not a dwelling more than two stories high, nothing blights the view of Allah’s majestic creation.

We residents are minuscule on this rippled expanse of caramel-colored mountains dotted green with pines, junipers, wild herbs, and a luscious grove of walnut, apple and blossoming almond trees on the valley floor. 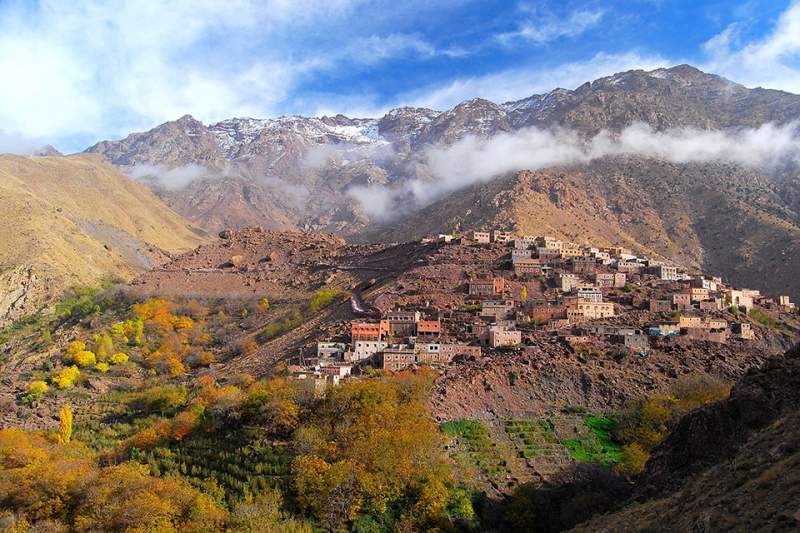 Would You Pay a Visit to the Garbage Dump?

Among Abdul-Matin’s suggestions to awake our connection to Allah’s earth and our responsibilities to it, is to visit landfills or garbage dumps.

Not exactly a romantic afternoon or fun filled family day, but he’s right, of course.

I was born in San Francisco, the same city as the creation of ‘Earth Day’ and having grown up in purportedly earth-friendly California, all of my life, I have earnestly believed that I was doing my part for the environment: buying in bulk to reduce packaging waste, using second hand goods as much as possible and in addition to fully using the curbside recycling I also regularly took my children to the recycling center to drop off our extra and oversized items.

When I first got to Morocco, like many foreigners here, I scoffed at the haphazard waste disposal methods and was disappointed to learn that there isn’t organized recycling here; instead, Morocco utilizes the traditional methods of reusing everything until it truly is trash.

Here in the mountains we have to burn our household trash and now I finally acknowledge every ounce of necessary or unnecessary waste which must be dragged across the foothills to incinerate in a shallow ditch.

And though I knew that disposable diapers actually take a very, very long time to dispose, I didn’t know that the strange chemicals they contain to absorb so much liquid also make them very difficult to entirely burn away.

After several attempts at incinerating our disposable diapers and leaving goopy remains of them on the mountain my children, who are being increasingly concerned about caring for our environment, convinced me to return to cloth diapers- they even offered to help launder them!

The conveniences we have left behind can and are often tallied by my family, but the enrichment in our seemingly accidental but beloved low-impact lifestyle is immeasurable.

Understandably, not everyone can or wants to dirty their hands with this sort of ascetic trip we are on, but I think it’s very likely that you, like me, believe that you are doing your part for the environment in some way or another. But of course we could do more.

Take Abdul-Matin’s advice and go spend some time appreciating nature.  While you are out there at the state park or a local you-pick-it farm, notice the oil stains in the parking lot, the multitude of chemicals being used to clean and control your immediate environment, the trash floating in the stream and piling up in the rubbish bins.

If that’s not enough to persuade you, maybe you should go visit local garbage dump and get knee deep in our mess.