Short Answer: The objective is to know, not to convert. Muslims are not supposed to introduce Islamic teachings to others through the word of mouth only. Rather, it has to be introduced through practice and behavior. Dawah means introducing Islam to others and inviting them to study, learn, and read about it. It must be done with wisdom and kindness. Islamic dawah does not aim at converting people and this is a very distinguishing feature.

I also thank you very much for this interesting question which touches on a very sensitive issue.

I always believe that opening our hearts, speaking about our feelings, fears, and concerns will help alleviate our pains, lessen or even remove our stereotypes, and give us a more solid ground to work together.

In a world that is interlinked with Internet, mass media, and all other forms of communications, people should be more encouraged to know each other, as the methods of accessing such knowledge are available in a wide scale more than before.

The unfortunate thing, though, is that the more advanced we become, the more estranged, individualistic, and relaxed we tend to be. This affects us badly as we become less social, less challenging, and less independent.

Coming to your question about Islamic dawah, let’s analyze the word in its context. This will help us have a precise understanding of it.

The Arabic noun ‘Dawah’ comes from the stem (d – aa – a) which has been coined to refer to many meanings, including inviting others to something, praying to God, or invoking someone or something.

If for example you want to say: “I have invited him to the wedding” you will use this word “da-aawtu“.

If you want to say “I have prayed God” you will say “da-aawtu“.

And if you say “I have recalled my old memories” you will use another form of the same stem “istadaaytu“.

And if you want to say “the memories have come into my mind one after another”, you will use the same stem again saying “tada-aat“.

As you can see in that linguistic analysis, the word refers mainly to invitation, or calling someone for something. Because it has this generic linguistic excellence, the word has been used to refer to introducing Islam to others and inviting them to study, learn, and read about it.

Islamic dawah means then, introducing Islam to people, telling them the truth about its teachings, removing their misconceptions, and dispelling their fears. The main aim of this is basically living in an atmosphere of understanding and knowing each others’ belief.

The Quran teaches Muslims that Allah has created us from different tribes, backgrounds and colors in order to know each other and discover our differences in a more effective way that aims at serving humanity and pushing to the better.

The characteristic of Islamic dawah are drawn in the Quran as well and here are some of them:

1- It is a universal thing which means Islamic dawah is a universal call to all people; those with a religion and those who do not profess any religion to come to know Islam, read about it and explore its beauty.

This dawah is not aimed at a certain group of people and is not for people in a certain locality; it is for everyone everywhere.

2- It is a practical one: This means Muslims should not introduce Islamic teachings to others through the word of mouth only. Rather, it has to be introduced through practice and behavior.

This is simply because people will not be convinced that Islam tells us how to be compassionate unless they see Muslims sticking to compassion in their day-to-day behavior. 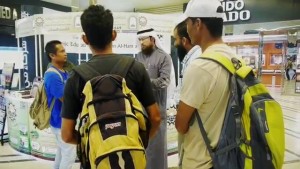 There is a saying that goes: “An example of one man in a thousand men is better than the words of a thousand men to one man.” Almighty Allah talks about action and words in that context in the verse that reads:

{And who speaks better than he who calls to Allah while he himself does good, and says: I am surely of those who submit?} (Fussilat 41:33)

In this verse, practice has been mentioned before words. If a Muslim practices the teachings of Islam in their full sense that will be enough to give a beautiful true image about it.

3- It has to be done with wisdom and kindness: Faith cannot be introduced to people by force and you cannot tie someone to a chair and tell him that he/she has to listen to you. This is against common sense and the very basics of what a religion is all about.

Therefore, the teachings of the Quran tell us that we have to do dawah in a wise way. This means to choose the suitable time, talk to them in an understandable language. This also means to use modern technology when possible, respect people and be honest with them.

It has also to be done with kindness which means we have to be patient. If some call us names or object to what we say we must be patient and always seek excuses to people and put ourselves in their shoes.

Even in case of dialogue or argument, this has to happen in a very honorable and respectable manner. Its sole aim should be of reaching a fair conclusion. We should have an agreement from the very beginning that we agree to disagree. This is the nature of the world, God created us to be different.

The Quran depicts this as well, as it says:

{Call to the way of your Lord with wisdom and goodly exhortation, and have disputations with them in the best manner; surely your Lord best knows those who go astray from His path, and He knows best those who follow the right way.} (An-Nahl 16:125)

This Quranic quotation tells people to avoid being judgmental as well. Only God knows who is guided and who is astray. It is only Him who knows the destinies of people.

The Aim is not to Convert

4- Islamic dawah does not aim at converting people and this is a very distinguishing feature of it. In this sense, it is different from Christian missionary work. Their aim is “saving the souls” of people by introducing them to Jesus Christ through whom they get salvation. 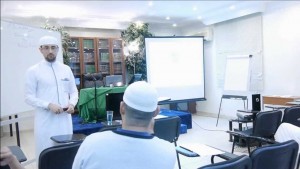 Islamic dawah is not like this. It aims at introducing the truth to people from the Muslim perspective and leaves people to decide. They are free to choose Islam as a path or to be fair in their judgment and stop being biased.

It is a call for people to free their minds from media-drawn images and tabloid headlines and base their understanding of other people, other religions and faiths on unbiased research and objective readings, whether these readings end in choosing Islam as a religion or not.

The objective is to know, not to convert.

I hope this answers your question. Please stay in touch.

Please continue feeding your curiosity and find more info in the following links: