aaa
Q Hello, I'm working on a project, which studies the misconceptions about Islam. I am curious to know if there is one symbol that represents Islam. Christians, for example, have the cross as their symbol; Jews have the star of David. I've seen the helal (crescent), but I am uncertain as to whether it represents Islam. Please clarify, thank you.

Thank you for this effort, trying to understand and support the cause of solidarity between believers.

Let me start by saying that there is no revealed or specific symbol for Islam, as a religion. Islam is a monotheist religion with a pure concept and understanding of The Creator as a transcendental God. It is fully against incarnation.

That is why the Islamic art and architecture is very distinct and you would not find any statues or even pictures of Prophet Muhammad (peace be upon him). Even the messenger of Allah was considered a man, who simply conveyed a message and was never considered an icon of Islam.

A simple symbol is quite different than an icon. A symbol refers to a meaning, while an icon tries to capture a transcendental meaning by turning it into an incarnated form. This idea also is very much related to the Christian claim of Trinity and the claim of the incarnation of God in Jesus.

That is why icons have a “holy” interpretation in Christian practices and the “embodiment” of meaning is a common feature, even in their ceremonies. This case is completely the opposite in Islam, which is highly transcendental; symbols are symbols! They are just pointing to a meaning and are never attempting to turn it into an immanent presence. They are neither trying to capture the sacred into an icon, which embodies it.

What prompted some Muslims to use the crescent, as a symbol on th
eir flag, was the starting of the fast during the month of Ramadan, when the crescent appears. The crescent marks the beginning of the Islamic months, as Muslims follow the lunar calendar, not the Gregorian calendar. The crescent is not a “holy symbol”. Islam does not believe in any “holy idols” or symbols to be worshiped!

{They ask you concerning the new moons. Say: They are but times appointed for [the benefit of] men, and [for] the pilgrimage … … …}

Lately, some accusations have been spread, which claimed that the crescent is a “holy symbol” of Islam and that it is originally a pagan symbol. The Christian apologist, Dr. Robert Morey, has spread the argument that the pre-Islamic Semitic world was the home to widespread worship of a moon god or goddess named ” Allah“.

The problem with this kind of speculations, about pre-Islamic deities from the Semitic world, as in this case, is the fact that any inscription prior to the advent of Islam is also prior to the introduction of diacritical marks in the Semitic languages.

Why is this a problem? Well, if one claims to have found evidence of a moon god named “Allah” in Palestine, Syria, or Lebanon, this claim applies to the respective deities of both Christianity and Islam. One of the basic Hebrew words for God, Eloh, can easily be pronounced alah without the diacritical marks. Not surprisingly, the Aramaic word for God is alah! 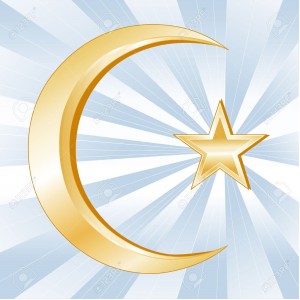 This word, in the standard script or the Estrangela script is spelled alap-lamad-heh (ALH), which are the exactly corresponding letters to the Hebrew eloh.

The Arabic word for God, Allah, is spelled in a very similar way. It is even related to the more generic word for deity, ilah.

We notice here the obvious linguistic and etymological connections between the respective words for God, in these closely related Semitic languages. We have, as clear examples: Allah, Alah, and Eloh being related to ilah, Eel, and El, respectively.

So, if the tri-theists (or the Trinitarians) want to claim that Allah/Alah was the name of a tribal moon god, and that worship of such a deity is a gross pagan practice, they should not trust their Bible for including this deity in its text! Nor should they believe in Jesus’ calling on this very deity, while on the cross (as per the Biblical account).

“The Name of Allah is the name of the true God:

In addition, read this passage from Shabir Ally’s excellent rebuttal to Dr Morey. He is answering the following question:

“Dr. Robert Morey proves in his book that ‘Allah’ is the name of the moon god worshiped in Arabia before Islam. Is he right?”

The book you refer to is entitled The Islamic Invasion: Confronting the World’s Fastest Growing Religion. The author, Dr. Robert Morey, sees Islam as an invasion into North America and a threat to his religious heritage.

Unfortunately, Dr. Morey has resorted to dishonest tactics in combating Islam. To prove his contention that Allah is not the God of Christians and Jews, he quoted from several books in such a dishonest fashion that the quotations say the opposite of what we find in those books.

Dr. Morey quoted from the Encyclopedia Britannica to support his case. But, in fact it says:
“Allâh is the standard Arabic word for ‘God’ and is used by Arab Christians, as well as by Muslims.” (Britannica, 1990 Edition – vol. 1, p. 276.)

Dr. Morey also quoted from H. A. R. Gibb to support his case. But Gibb actually says the opposite! In his book Mohammedanism, Gibb says on page 26 that both Muhammad and his opponents believed in the existence of a supreme God – Allah. Gibb further explains this on pages 37-38. 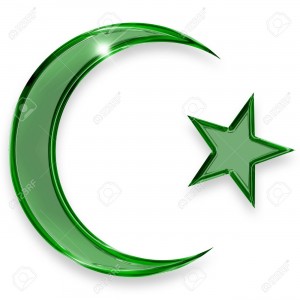 “In Arabia, Allah was known from Christian and Jewish sources as the One God. And, there can be no doubt whatever that he was known to the pagan Arabs of Mecca as the Supreme Being …”

Thus, I can say that using the crescent as a symbol, along others symbols, to represent Islam is “OK”, conditioned that you are aware that it is in no way holy or immanent codification of belief. Islam is a monotheist religion and its conception of God is highly transcendental.

Thank you, dear David, for allowing me to clarify and also elaborate further on issues, related to your question. Keep up the good work you are doing and please, keep in touch.