aaa
Q How would Muslims be united through Hajj? Please explain. Thank you.

It is a fact that hajj is a mesmerizing festival of worship that reflects the unity of all Muslims from all over the world. Unity of Muslims and their aimed bondage of brotherhood is reflected in every single ritual during hajj.

Actually, the first entity that experiences some kind of unity during hajj is the pilgrim himself. Hajj is a clear manifestation of the unity of the human self and body in complete submission to the One and Only God.

During the journey of hajj, the Muslim embarks on a deep spiritual journey which witnesses serious self-denial, where he neglects most of his physical needs, opening the door for his soul to overwhelm his relation with existence and reach a profound climax of joy in submission to Allah, the One and Only God.

In fact, the pilgrim does deny himself all his lawful physical needs, in expression of love to Allah, all except what would keep his survival and that is “food”.

Otherwise, the pilgrim willingly dresses in humble clothes, denies himself intimate expressions of love, deserts his homeland, walks barefooted, sleeps on the ground, shares his days and nights with brothers and sisters who used to be “strangers” and “different” a short while ago.

How can a person share this unique experience of self-unity with others, without feeling united with them?

The simplest result here is an overwhelming sense of unity and equality that prevails and encompasses all pilgrims.

Then, the question here is, why does Allah order the rituals of hajj to take all pilgrims in this direction?

The answer is that Allah wants Muslims to be united through hajj.

Allah wants Muslims to experience the real feeling of equality and unity within this great festival of worship, where Muslims would come up with the net result that nothing is ever worth being divided over again; for they encounter the true feeling and understanding of the same feeling of devotion, same humble code of dress, same direction of prayer, and same target of reaching God.

The result is: “We are all the same, all in one, one entity, one nation.”

The Quran (which Muslims believe is the word of God) directs pilgrims towards the concept of unity through a very wise divine order, which says what means: 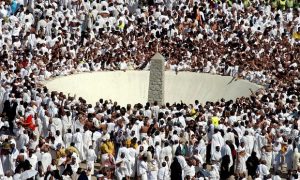 {There should be no indecent speech, misbehavior, or quarrelling for anyone undertaking the pilgrimage…} (Al-Baqarah 2:197)

Accordingly, the pilgrim needs to understand that the Quran is clearly directing Muslims, who are going for hajj, to drop any manner or attitude that would lead to their division or would result in any kind of dispute.

The rituals of hajj smoothly and peacefully take the pilgrims towards the understanding and the experiencing of practical and down-to-earth unity. Then, the Quranic order denies them anything that would cause division or partition.

Focus on What is Common

Just like many other nations, some Muslims might go emotional or a bit fanatic about a certain cultural concept, identity, or political view.

Differences and disputes might rise and cause division between Muslims. That is where hajj serves best. Hajj is a compelling conference of unity that practically re-directs each pilgrim to his real identity and his first priority: being a Muslim, a brother or sister of all Muslims.

The sense of sharing that prevails during hajj makes the pilgrims focus on what is in common. They do not focus on what is different. It provides a cozy and comfortable atmosphere that ignores social differences and the diversity of political views and cultural habits. All are one in the eyes of God, standing on the same mount of Arafah, seeking the same end, which is the closeness of God.

Did nature ever witness a flock of birds flying in diverse directions?

Unity of Muslims is a targeted goal for this blessed Islamic pillar. All it needs from Muslims is to drop what would curb the reaching of this goal.

The Quran clearly says what means:

{The believers are brothers, so make peace between your two brothers and be mindful of God, so that you may be given mercy.} (Al-Hujurat 49:10)

Here comes another clear and direct Quranic order related to the unity of Muslims. This should be the general attitude of Muslims. This is intensively reflected through the worship of hajj. 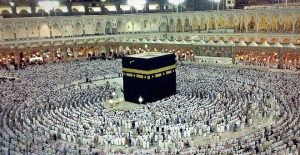 The outcome of such a peaceful unity is a common joy that prevails and mesmerizes the senses of thousands of pilgrims. Then, the real prize is the absolute forgiveness that each pilgrim receives. Coming down from Mount Arafah, they are all forgiven for sure. Hand in hand, they come down, as pure as a newborn.

Dear Malcolm, I hope my answer is of help. In case you need to know more, please do not hesitate to contact us again.

How to Maintain the Peace and Unity of Hajj?

How Hajj Promotes Peace and Unity

Hajj & Unity – How to Bridge the Divide?