aaa
Q Is fate really our free choice? Or does Allah decide our destiny? How do you reconcile free will with destiny in Islam? How about marriage and babies born with mental disabilities? Are they also part of destiny?

Thank you for your questions and for contacting Ask About Islam.

You are right in saying that Allah has predetermined everything in our lives and has power over all things.

This does not mean, however, that Allah has made all of our choices for us beforehand, nor does it mean that He forces us to make mistakes so that He can punish us for them.

That would not be in accordance with Allah’s nature of being just and merciful.

For Him to be the One and Only God, He cannot be unjust or cruel.

You were also correct in telling your friend that no one will die unless it is the time that Allah has chosen for them.

Also we see many examples of people surviving terrible car crashes, fires, and injuries, and we are amazed when this happens. We see people in similar situations die.

We also see many people die of seemingly minor injuries or accidents or for no apparent reason at all. They die suddenly at a young age and we are at a loss for words. All we can say is that their time was up; what Allah has decreed must happen.

It is highly likely that a person will die from a 20-story fall, but there is no guarantee that death will be the result.

A person may be shot multiple times and still live, while another may be killed by a slight blow to the head. This is because the time of death for each and every one of us is predetermined by Allah. It is not a matter of choice for us, not even suicide.

Death is one of the four things mentioned in the hadith of Prophet Muhammad (peace and blessings be upon him) that are written for us while we are still in our mother’s womb; the others are our provisions, the age at which we die, and whether we will be one of the damned or the blessed in the hereafter.

According to one hadith, the Prophet Muhammad (peace be upon him) was at a funeral.

He came to some of his Companions (may Allah be pleased with them) with a stick in his hand.

He lowered his head and scratched the ground with the stick saying,

“There is not one among you to whom a seat in Paradise or Hell has not been allotted and about whom it has not been written down whether he would be an evil person or a blessed person.” One of the Companions said, “Allah’s Messenger, should we not then depend upon our destiny and abandon our deeds?”

This hadith is important in explaining how Allah sets a person’s destiny.

As Prophet Muhammad explained to his Companions, it is not decided for us where we will end up.

Our destiny is determined by our choices.

Allah tells us in Surat Al-Layl that those who believe in goodness and choose to do righteous acts, such as being charitable, will have the path to goodness and Paradise made easy for them.

Allah also tells us that those who reject belief in goodness and are miserly and arrogant will have the path to misery and Hell made easier for them.

We are not forced into anything. For Allah to do so would not produce sincere faith in His servants.

When we freely choose goodness over evil, it is obvious that we sincerely believe in it; otherwise we would not have chosen it.

When Allah creates us, He is well aware of all the intentions we will have, all the choices we will make, and all the things that we will do in our lives before we do them.

He chooses what He will allow us to do and what He will not according to His infinite wisdom, and then has it recorded as our destiny.

If our intention is to do good purely for Allah’s sake, He knows it before we do and He makes the path towards it easy for us. He then rewards us for our faith and good choices.

If our intention to do good is not solely for His sake, He also knows it before we do. He will reject it and punish us for our choices.

For those who choose selfishness and arrogance, Allah will allow them to make mischief, for reasons only He knows, and He will make their path to Hell easy for them. He will then have this recorded as their destiny.

Regarding marriage, we are again free to choose our spouse. Whether we stay together for life or get divorced is still a result of our choices.

Allah ordains it before we are born and it is His will if we have successful marriages or not. Also, Allah determines whether we will have children.

Some try very hard and are unsuccessful, while others are blessed with many.

Some try to avoid having children but are given them anyway.

In the Quran we read what means:

{To Allah belongs the dominion of the Heavens and the Earth. He creates what He wills (and plans). He bestows male or female (children) according to His Will (and Plan), Or He bestows both males and females, and He leaves barren whom He will: for He is full of Knowledge and Power.} (Ash-Shurah 42:49-50)

There is no such thing as an accidental birth. Allah creates us as He wills.

The birth of each and every one of us is a miraculous event.

The Past & Allah’s Will

In Islam, we accept things that happened in the past as being Allah’s will.

If we marry and try to have children, it is only by Allah’s grace that we receive them.

Nothing happens except by Allah’s will. We are only able to do what He allows us to do and according to His wishes.

Regarding your question about those born with mental disabilities, it is clear from the following verse that it is the will of Allah they are born that way.

{It is He Who shapes you in the wombs as He pleases. There is no god but Him, the Exalted in Might, the Wise.} (Aal-Imran 3:6)

Allah creates each and every one of us in a unique form. No two people since the time of Adam and Eve have ever been exactly alike.

Even identical twins have their own personalities, likes and dislikes, and good and bad qualities. The Prophet is reported to have said:

There is no disease that Allah has created, except that He also has created its treatment. (Al-Bukhari)

Those who are created with disabilities or special needs are unique in their own way. Allah tests us to see who among us is best in conduct.

We All Have Limitations

If some of us are born with apparent problems and deficiencies, there is no reason why we cannot search for ways to help them or to make their lives easier.

It is a tremendous way to practice patience, mercy, helpfulness, and generosity with one another. 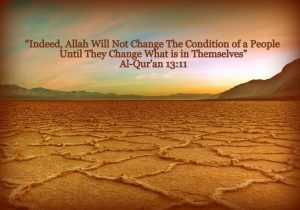 It is not necessarily a curse on them that Allah has limited their abilities in certain things.

All of us have limitations in our own abilities. Some of us are limited in our ability to do things that many others take for granted, such as the ability to see, hear, or to communicate clearly with others.

Many people who suffer from mental illness from the time of birth are very likely to be destined for Paradise.

Some people are born with no potential ability to understand that there is a vast universe around us and an all-powerful being that created it and is in full control of it.

They have difficulty differentiating between what is right and what is wrong and cannot understand that their actions impact the people around them.

How, then, could Allah create people with these types of problems and then punish them for their behavior?

That would be neither just nor merciful.

Allah, of course, is Most Merciful and Most Just. He creates what He wills and He causes it to die when and how He wills.

I hope this has helped you to understand these issues better.

May Allah guide us all to what pleases Him so that we may reach Paradise, the ultimate reward for righteousness toward our Merciful Creator.

How Much of Your Life is Determined? Understanding Qadar

What Is The Importance of Qadar As An Article of Faith?