aaa
Q I am a new-Muslim and I will be going for hajj for the first time. Even though I have learned some of the rituals, it is still not clear to me. I am hoping I will learn more once I get there. I have many non-Muslim friends who asked me about the Hajj but I am unable to explain to them what it is? May you please explain the hajj to me so I can explain it to my non-Muslim friends?

Short Answer: Hajj is the fifth pillar of Islam. Muslims who are physically and financially capable of doing Hajj should do it once in their lifetimes. They perform the core rituals of Hajj in Makkah, Mena and Arafah over a duration of five days. They learn unity, equality, universality, unity of purpose, togetherness, selflessness, humbleness, and sharing. The Hajj also connects the present with the past and the future. Pilgrims do hajj following the footsteps of prophets Muhammad, Abraham, and Ismail (peace be on them). It is a spiritual journey that reminds pilgrims of the Day of Judgement, a simulation of the great gathering of all people after resurrection.

In order to describe hajj (pilgrimage to Makkah) to non-Muslim colleagues, friends, and co-workers, several aspects of hajj should be explained to them.

Hajj is to go to Makkah at a certain time to do certain rituals and services.

It is such an essential part of Islam, that it is described as being the fifth of the pillars of Islam.

Muslims who are physically and financially capable of doing it should do it once in their lifetimes.

Hajj includes several actions to be done in Makkah as well as three other places bordering the city of Makkah; Mena, Arafah, and Muzdalifah.

Hajj starts by getting to the state of Ihram (state of consecration), where the pilgrim is restricted from doing certain things like wearing regular clothes, having hair cut, clipping nails, using perfumes, having any marital intimate relation, hunting, cutting trees, as well as some other restrictions.

Actions of hajj also include staying for almost 24 hours in Mena on the eighth day of  Dhul-Hijjah (the last month in the Islamic calendar) before leaving to Arafah the next day to do the most important part of hajj: staying all day at Arafah.

Pilgrims then move from Arafah to Muzdalifah to spend that night there before leaving in the following morning to Mena.

On the tenth of Dhul-Hijjah, pilgrims offer a sacrificial animal like a goat for Allah (God), shave or trim their hair, throw seven pebbles at a station there in Mena, before they get to Makkah to go around the Kabah seven times and then walk between two hills there by the names of Al-Safa and Al-Marwah.

By doing this, pilgrims get out of the state of Ihram completely and the restrictions mentioned earlier are then over.

On the following three days pilgrims stay at Mena to throw pebbles at three different stations there.

They throw seven pebbles at each of the three stations and repeat that on the following two days. This is a total of 63 pebbles on these three days plus seven pebbles already thrown on the tenth of Dhul-Hijjah. So the overall number they throw is 70 pebbles.

Then, before leaving Makkah, pilgrims go around the Kaabah seven times as a farewell ceremony. 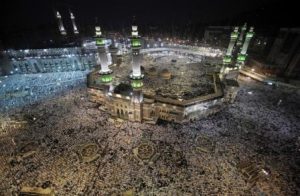 As a matter of fact, hajj is not only about visiting some holy lands to do some rituals. It is much more than a physical movement.

Pilgrims travel, leaving behind their loved ones. The males replace their regular clothes with a couple of very simple unsewn sheets to wrap around their bodies after taking a shower.

This is a simulation for washing the deceased body and shrouding it before the burial. Women wear simple clothes.

Millions of people gather in Makkah, Mena, Arafah, and Muzdalifah wearing the same, looking the same, doing the same, and behaving the same. It is a simulation of the great gathering of all people after resurrection on the Day of Judgment.

Hajj also clearly connects the present to both the past and the future in a marvelous way. Pilgrims do hajj following the footsteps of prophets Muhammad, Abraham, and Ismail (peace be on them).

In many of its actions, they commemorate the story of Hajar (Prophet Abraham’s wife) when she jogged between the two hills of Al-Safa and Al-Marwah in search for water for her baby Ismail.

They drink from Zamzam Well and remember how this blessed well miraculously gushed out in the middle of the desert under the feet of the baby Ismail.

Pilgrims circle the Kabah and remember Prophet Abraham. It was he who raised the building of the Kabah along with Prophet Ismail by the order of Allah. He was also ordered to announce hajj for all people throughout the ages:

In this way, pilgrims are connected to the past by honoring the story of Prophet Abraham and his family.

Certain pillars are to be thrown with pebbles as a symbol of defeating the devil.

Argumentation, useless talk, foul language, as well as intimate marital relations are not allowed during hajj. This ruling speaks to being in full control of the desires of the self.

In this way, hajj relates to the future by resetting the mindsets and consciousness of pilgrims to the original state of purity that they were created in. Unity, equality, universality, unity of purpose, togetherness, selflessness, humbleness, and sharing, as well as so many other qualities are learned by practice during hajj.

Spiritual transformation is one of the key purposes of hajj. It is referred to by the Prophet Muhammad (peace be upon him) when he said:

“Whoever performs hajj (pilgrimage) and does not have sexual relation with his spouse), nor commits sin, nor disputes unjustly (during hajj), then he returns from Hajj as pure and free from sins as on the day on which his mother gave birth to him.” (Al-Bukhari) 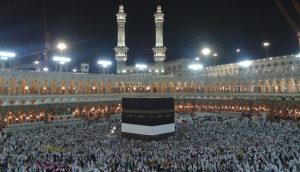 Spiritual transformation through hajj was clear in the life of Malcolm X, who has been described as one of the greatest and most influential African Americans in history.

In his famous ‘Letter from Mecca’, he wrote that the white people he met during his pilgrimage forced him to “rearrange” his thinking about race and “toss aside some of [his] previous conclusions”.

In conclusion, hajj is a pillar of Islam where pilgrims experience many things that can be found only through such a unique journey.

I hope this answers your question. Please keep in touch.

The Woman Who Founded Hajj Rites

The Story of Kabah – The Sacred House of God

Why Does The Quran Claim Abraham Built the Kaaba?